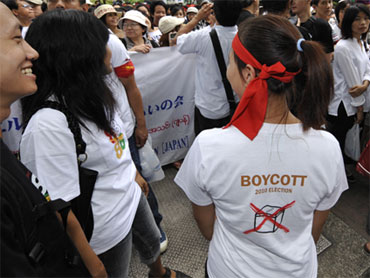 Myanmar's ruling military junta announced Friday that the country's first elections in two decades will be held Nov. 7, finally setting a date for polls that critics have dismissed as a sham designed to cement military rule.

Foreign governments have urged Myanmar, also known as Burma, to ensure the elections are open, fair and include the party of detained pro-democracy icon Aung San Suu Kyi. Her party, however, has decided to boycott the vote, saying the junta has imposed unfair rules that restrict campaigning and effectively bar the Nobel Peace Prize laureate and other political prisoners from participating.

The election date is another symbolic blow to Suu Kyi's chances of taking part - it falls just days before her current term of house arrest is due to expire on Nov. 13.

"This is all orchestrated. It's a carefully arranged plan by the (junta) to get the right results and further marginalize the opposition," said Phil Robertson, deputy director of Human Rights Watch's Asian division.

"This is all about transitioning from a military government to a military-controlled civilian government," he said.

Suu Kyi's party won a landslide victory in the last elections in 1990. But the junta refused to honor the results and has kept her locked away, mostly under house arrest, for 15 of the past 21 years, ignoring global pleas for her freedom.

Her National League for Democracy party said the date would not allow sufficient time for campaigning, which cannot officially begin until the junta announces a campaign period.

"Without freedom of media or expression, the elections cannot be either free or fair," party spokesman Nyan Win said.

Friday's brief announcement by the Election Commission was carried on state TV and radio.

"Multiparty general elections for the country's parliament will be held on Sunday Nov. 7," said the announcement, which called on political parties to submit their candidate lists starting Monday through Aug. 30.

The elections are part of the junta's "roadmap to democracy," a seven-step program which it says will shift the nation from 50 years of military rule.

Election laws passed ahead of the voting have been criticized as undemocratic by the international community. They effectively bar Suu Kyi and other political prisoners - estimated at more than 2,000 - and members of religious orders from taking part in the elections. Suu Kyi's party was also automatically disbanded under the laws for refusing to register for the elections.

Tight rules for campaigning bar parties from chanting, marching or saying anything at rallies that could tarnish the country's image.

Renegade members of Suu Kyi's disbanded party have formed a new group, the National Democratic Force, to carry the party's mantle in the vote. Suu Kyi, who favored a boycott, has expressed dissatisfaction through her lawyer with the breakaway party.

Forty political parties have registered to contest the elections, and six others are awaiting approval to run. Several of the parties are linked to the military.

Several other parties have criticized the election process. The Democratic Party said it complained Tuesday to the Election Commission that police are intimidating its members.

A 2008 constitution adopted under the junta's roadmap reserves 25 percent of parliamentary seats for the military and says more than 75 percent of the lawmakers must approve any amendments to the charter.