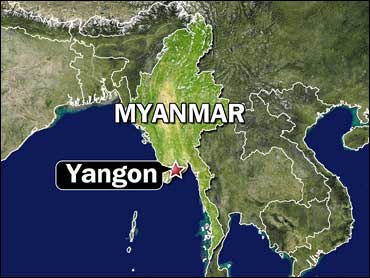 A U.S. citizen was released from prison in his native Myanmar on Thursday after serving part of a three-year sentence for subversion and is set to be deported.

The aunt of Kyaw Zaw Lwin, also known as Nyi Nyi Aung, said he was released after 6 1/2 months in prison and taken to Yangon's international airport to catch a flight to Thailand.

Khin Khin Swe said her nephew was accompanied to the airport by a U.S. consular official.

The 40-year-old Kyaw Zaw Lwin was arrested Sept. 3 on arrival at the same airport. He was initially accused of plotting to stir up political unrest, which he denied.

He was sentenced in October for forging a national identity card, for possession of undeclared foreign currency, and for violating Myanmar's so-called Resident Registration Act - under which he was accused of failing to renounce his Myanmar citizenship when becoming an American citizen and failure to inform authorities of his new address.

"He looks well and happy, though much thinner than before," said Khin Khin Swe.

"I am very happy for him but I want families of other prisoners of conscience to be happy and hope that all will be released," said Khin Khin Swe, who said five of her relatives are in prison, including her son-in-law.

Myanmar's military government holds more than 2,000 political prisoners, according to the U.N. and independent human rights organizations. The most prominent is opposition party leader Aung San Suu Kyi. The 1991 Nobel peace laureate has been detained for about 14 of the last 20 years, and is currently under house arrest, from which she is due to be released in November.

Kyaw Zaw Lwin's mother is serving a five-year prison term for political activities, and his sister was sentenced to 65 years in prison for involvement in 2007's pro-democracy protests, which government forces brutally suppressed, activist groups and family members say.

Kyaw Zaw Lwin, who was held at a prison about 180 miles north of Yangon was brought to Yangon's notorious Insein prison Wednesday and handed over U.S. consular officials Thursday afternoon, said his aunt.

As a teenager in Myanmar, previously known as Burma, he helped organize students during Myanmar's 1988 pro-democracy uprising and later fled to the United States. According to dissident groups, he is a resident of Maryland.

His reason for returning to Myanmar was not clear, but there has been speculation he hoped to see his jailed relatives. He staged a 12-day hunger strike in December to protest conditions of political prisoners in Myanmar, according to human rights groups.