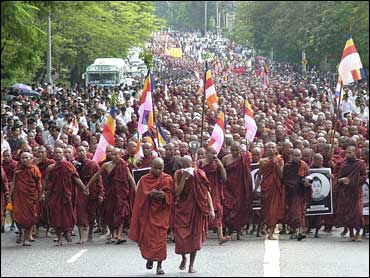 Myanmar's military government issued an ominous warning on Monday to monks leading the strongest protest movement in two decades, telling senior Buddhist clerics that unless they restrained their juniors, the government would take action on its own.

As many as 100,000 protesters led by a phalanx of barefoot monks marched Monday through Yangon, the most powerful show of strength yet from the movement that has grown in just a week from faltering demonstrations to one rivaling the 1988 pro-democracy uprising, which was violently crushed by the military.

Afterward, Brig. Gen. Thura Myint Maung, Myanmar's religious affairs minister, was shown on state television delivering the warning during a meeting at the Kaba Aye pagoda in Yangon, the country's biggest city. He accused the protesting monks of being instigated by the regime's domestic and foreign enemies, but did not say how they might be punished.

It wasn't clear what prompted the sudden warning from the government, which has remained quiet for days as the marches gathered momentum.

"The atmosphere is one of euphoria, if anything," said Canning, prior to the government's threat.

Marching for more than five hours and over at least 12 miles, a last hard-core group of more than 1,000 maroon-robed Buddhist monks and 400 sympathizers finished by walking up to an intersection where police blocked access to the street (seen at left) where democracy leader Aung San Suu Kyi is under house arrest.

Making no effort to push past, the marchers chanted a Buddhist prayer with the words "May there be peace," and then dispersed. About 500 onlookers cheered the act of defiance, as 100 riot police with helmets and shield stared stonily ahead.

Some participants said there were several hundred thousand marchers in their ranks, but an international aid agency official with employees monitoring the crowd estimated said the size was well over 50,000 and approaching 100,000.

The march was the latest in a series of protests that began Aug. 19 as a movement against economic hardship in the Southeast Asian country after the government sharply raised fuel prices. But arrests and intimidation kept demonstrations small and scattered until the monks joined and managed to bring people into the streets in numbers not seen since 1988.

On Aug. 8, 1988, demonstrations against the military dictatorship spread across the country, then known as Burma, and propelled Suu Kyi into prominence. The uprising toppled dictator Ne Win, but a new crop of generals seized power in September 1988 after brutally crushing the nationwide demonstrations, gunning down crowds and arresting protesters. Thousands died.

The junta called elections in 1990 but refused to recognize the landslide victory of Suu Kyi's party. Suu Kyi, who won the 1991 Nobel peace prize while under house arrest, was last detained in May 2003 after her motorcade was attacked in northern Myanmar by a pro-junta mob.

The usually iron-fisted junta has so far kept minimal security at the latest wave of protests, and diplomats and analysts said Myanmar's military rulers were showing the unexpected restraint because of pressure from the country's key trading partner and diplomatic ally, China.

Monday's march began, like the previous ones, at the Shwedagon pagoda, a historical center for political movements as well as the country's most sacred religious shrine. Some 20,000 monks took the lead, with onlookers joining in on what had been billed as a day of general protest.

In the central city of Mandalay, meanwhile, 500 to 600 monks set off shortly after noon on their own protest march.

The increasingly confrontational tone of the anti-government protesters has raised both expectations of possible political change and fear that the military might forcefully stamp out the demonstrations.

A Southeast Asian diplomat, speaking on condition of anonymity as a matter of protocol, said the regime was under pressure from China to avoid a crackdown just as its larger neighbor has pressured it to speed up other democratic changes.

"The Myanmar government is tolerating the protesters and not taking any action against the monks because of pressure from China," the diplomat told The Associated Press. "Beijing is to host the next summer's Olympic Games. Everyone knows that China is the major supporter of the junta so if government takes any action it will affect the image of China."

China, which is counting on Myanmar's vast oil and gas reserves to help fuel its booming economy, earlier this year blocked a U.N. Security Council criticizing Myanmar's rights record saying it was not the right forum.

But at the same time, it has employed quiet diplomacy and subtle public pressure on the regime, urging it to move toward inclusive democracy and speed up the process of dialogue and reform.

Josef Silverstein, a political scientist and author of several books on Myanmar, said it would not be in China's interest to have civil unrest in Myanmar, also known as Burma.

"China is very eager to have a peaceful Burma in order to complete roads and railroads, to develop mines and finish assimilating the country under its economic control," Silverstein said.

The movement seemed to gain momentum Saturday, when more than 500 monks and sympathizers went past barricades to walk to the house where Suu Kyi is under house arrest. She greeted them from her gate in her first public appearance in more than four years. Access to her home was barred Sunday and Monday.

The meeting symbolically linked the current protests to Nobel laureate's Suu Kyi's struggle for democracy, which has seen her detained for about 12 of the last 18 years.