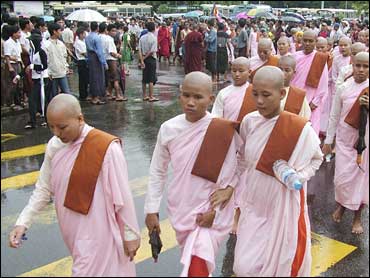 Buddhist nuns swelled the forces of anti-government protesters in Myanmar, whose sharpening battle of wills with the military regime brought 20,000 people onto the streets and set up an edgy confrontation with police Sunday.

A march of 20,000 people in Yangon's streets, including about 10,000 monks and at least 100 white-robed nuns, was the country's largest anti-government protest since a failed democratic uprising in 1988.

It raised both expectations of possible political change and fear that the military might revert to form by trying to stamp out the demonstrations by force of arms, as it did in 1988, when it ended up killing thousands of people nationwide.

The protests began on Aug. 19 as a movement against economic hardship, after the government sharply raised fuel prices, increasing the overall cost of living. Arrests and intimidation saw the movement begin to falter until last week, when monks - who have long served as the country's conscience - became the protests' vanguard.

The movement seemed to gain momentum Saturday, when more than 500 monks and sympathizers had been allowed past barricades to walk to the house where democracy leader Aung San Suu Kyi is being detained. Looking "fit and well," according to a witness, she greeted them from her gate in her first public appearance in more than four years.

The meeting symbolically linked the current protests to Nobel laureate's Suu Kyi's struggle for democracy, which has seen her detained for about 12 of the last 18 years.

But any optimism on the protesters' part was tempered Sunday when government security forces - who had kept a low profile for the past few days - deployed in force to block a new march to Suu Kyi's house. The junta had clearly been trying to avoid provoking the well-disciplined, widely respected monks, aware that mistreating them would likely cause public outrage in staunchly Buddhist Myanmar.

A crowd of about 400 people led by 150-200 monks peacefully gave up their attempt Sunday to get to Suu Kyi's gate after being turned back at two different approaches where police had placed barbed wire barricades.

Two monks went forward to the police lines to negotiate passage the second time, but were apparently rebuffed. They then briefly prayed before walking in another direction, after which the crowd began to disperse, witnesses said.

The monks had been carrying a large yellow banner saying that "Love and kindness must win over everything."

Suu Kyi, 62, is the leader of the National League for Democracy party, which won a 1990 general election but was not allowed to take power by the military. She has been under detention continuously since May 2003.

The heavy security presence, including two lines of police - the rear line armed - and a police truck and fire engine, raised tensions after several days of a hands-off approach by authorities.

The march of 20,000 people downtown was led by 10,000 monks who gathered at the famous golden hilltop Shwedagon Pagoda before marching downtown to Sule Pagoda and past the U.S. Embassy and other places, witnesses said.

Some monks shouted support for Suu Kyi, while a crowd of about 10,000 sympathizers marched along, some holding hands to form a human chain to protect the maroon-robed clerics.

While authorities did not intervene in Sunday's march, plainclothes police trailed the marchers. Some, armed with shotguns, were posted at street corners along the route.

A monk gave a speech Sunday calling for Suu Kyi's release and national reconciliation, the witnesses said, again positioning their cause with her long-running struggle for democracy.

The synergy could put greater pressure on the junta to decide whether to crack down or compromise.

Other monks' demonstrations took place Sunday in the cities of Mandalay, Monywa, Kalay and the Kachin state capital of Myitkyina, said reports in Myanmar exile media.

"In our country the monks are the highest moral authority. When the monks take the leading role, the people will follow," said Soe Aung, a spokesman for the National Council of the Union of Burma, a coalition of opposition groups based in neighboring Thailand.

"The monks are the majority and they are leading the movement right now," he said in an interview with The Associated Press in Bangkok.

But he expressed concern the military will not stand aside forever.

"Hopefully the international community will not keep quiet, and they will do something before terrible things take place in our country," he said.

In the latest expression of international concern over the events, U.S. Secretary of State Condoleezza Rice said the Bush administration was watching the situation "very carefully."

Speaking ahead of a meeting in New York with the foreign minister of China - the junta's top diplomatic ally - she said the people of Myanmar "deserve a life to be able to live in freedom, just as everyone does."

She said President Bush would discuss the military regime's "brutality" when he meets other leaders at the upcoming U.N. General Assembly.