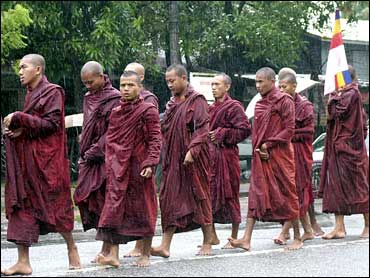 Monks marched in Myanmar's largest city for a fourth straight day Friday, as the military junta insisted it has no plans to impose a state of emergency to quell protests that pose the greatest challenge to the regime in a decade.

Braving intense rain, several contingents of monks from monasteries around Yangon gathered after noon to pray at the Shwedagon Pagoda, the country's holiest shrine, before about 500 embarked on a march downtown. About 100 onlookers joined them as they started.

It was the fourth straight day the monks have marched in Yangon. Their activities have given new life to a protest movement that began a month ago after the government raised fuel prices, sparking demonstrations against policies that are causing economic hardship.

The saffron-robed monks have become the leaders of a movement launched on Aug. 19, when a few hundred ordinary citizens marched to protest a government increase in fuel prices.

The demonstrations also reflect long pent-up opposition to the military regime and have become the most sustained challenge to the junta since a wave of student demonstrations that were put down by force in December 1996.

Monks in Myanmar, which is also known as Burma, have historically been at the forefront of protests - first against British colonialism and later military dictatorship. They also played a prominent part in a failed 1988 pro-democracy uprising that sought an end to military rule, imposed since 1962.

Monks also are refusing alms from the military and their families - an embarrassing gesture for the junta. Some monks have started a religious boycott of the junta, symbolized by their holding their black begging bowls upside down as they march. In the Myanmar language, the word for boycott comes from the words for holding the bowl upside down.

In their demonstrations, the monks have been chanting two sermons, one associated with warding off misfortune and another a wish for the well-being of all people. Onlookers accorded the monks respect by making the traditional Buddhist gesture of hands clasped together in front of bowed heads. Some have also offered snacks and drinks to the marchers.

In the Buddhist fashion of avoiding direct secular entanglements, the monks have made no explicit anti-government gestures, but their message has been unmistakable to fellow citizens.

Thursday, nearly 1,000 monks marched through Yangon, proceeding from the golden Shwedagon hilltop pagoda, the country's most revered shrine, to the Sule pagoda downtown and finally rallying outside the U.S. Embassy.

The U.S. is among the foreign critics of Myanmar's military government.

Protesting monks have been carrying religious flags and holding their begging bowls upside down - a symbol of protest.

The monks marched through many of Yangon's main thoroughfares, attracting supporters. About 1,000 mostly young bystanders marched alongside, arms linked, to prevent any intrusion.

No uniformed security personnel were in sight, though dozens of plainclothesmen stood by without interfering.

During a Wednesday march, protesting monks were barred from the Shwedagon pagoda. That same day, monks briefly occupied the Sule pagoda, during one of several marches around the country. The monks pushed past closed gates to occupy the temple for 30 minutes before returning peacefully to their monasteries, witnesses said.

Angry over being beaten at an early demonstration, monks threatened to take to the streets this week unless the military junta apologized. The regime remained silent, so they launched protests around the country, beginning on Tuesday, that have grown from several hundred monks to several thousand.