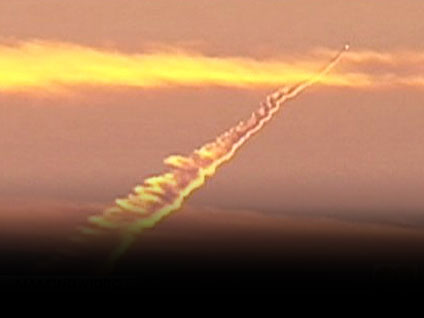 So who bears responsibility for the flap over the video of the "mystery missile" off the coast of southern California: the media for starting it or the Pentagon for taking so long to finish it?

One thing I'm sure of: it wasn't KCBS cameraman Gil Leyvas' fault. All he did was his job. He shot the pictures and told his news desk what he had.

What about the news broadcasts that made the decision to air the video? They checked with the Air Force and the Navy to see if they had launched any missiles. What were they supposed to do when the answer came back no? Just sit on the video until somebody came along with an explanation? Don't think so.

They might have dipped into the subculture of contrail -- short for "condensation trail" -- watching and found someone who had seen enough of these missile-like contrails to know it was really a plane. Instead, they turned to a bona fide defense expert, a former deputy secretary of defense, who thought it looked like a submarine-launched missile. Nothing wrong with that.

When I came into work on Tuesday morning, every Defense Department official I talked to said some variation of "it's the damnedest thing -- looks like a missile, but we have absolutely no evidence that a missile was fired."

That left a vacuum for conspiracy theories to rush in -- it was a secret weapon the Pentagon won't admit exists, the air defense command was asleep at the switch, etc, etc.

It was not until Tuesday afternoon that Defense officials were starting to leak the belief that it was an airplane. They weren't willing to say it on the record until Wednesday morning, mainly because they had to get other agencies -- the Federal Aviation Administration, the Department of Homeland Security, as well as the Pentagon's own air defense command -- to sign off on it.

By then, 36 hours had elapsed. Maybe the moral of the story is we in the media need to go slower while the government has to move faster.

David Martin is CBS News' National Security Correspondent. You can read more of his posts in Hotsheet here.