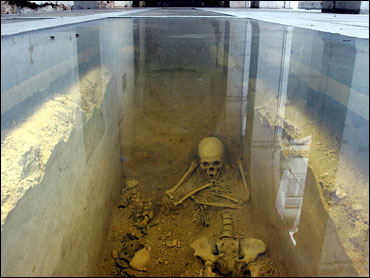 It was a chilling discovery: a mass grave of human bones — skulls smashed and scorched by fire, dog bites on a child's thigh bone, a forehead with an apparent bullet hole.

Three years after the discovery, by workers digging up the cloisters of a 17th-century Franciscan convent, forensic experts and historians say they have solved the mystery.

They say the estimated 3,000 dead in the grave were victims of the earthquake that devastated Lisbon in 1755, and that this is the first mass grave of its kind ever found in the Portuguese capital.

"You didn't have to be a genius to work it out. The evidence is overwhelming," says Miguel Telles Antunes, curator of the Academy of Sciences Museum who coordinated the investigation. "This could only have been some singular, calamitous event."

The quake, which included a tsunami and a fire that raged for six days, was one of the deadliest catastrophes ever to hit western Europe. It is thought to have killed up to 60,000 people, and it destroyed much of the wealthy and elegant capital of a Portuguese empire stretching across Asia, Africa and Latin America.

Historians had a rough picture of what happened on Nov. 1, 1755, but detailed accounts were scarce. Now the mass grave presents a vivid and gruesome tableau of the past.

"We had clues about what occurred. Now we have the proof," Telles Antunes said.

The thick-walled convent, parts of which survived the quake, now houses the Academy of Sciences, which distributed the remains among forensic scientists in several fields. Those sleuths, using the latest technology in a kind of C.S.I. Lisbon, gradually reconstructed events.

The mass grave held not just human remains but animal and fish bones, bits of pottery and ceramics, clay pipes, buttons, medallions, rosaries and even a thimble. All predated the quake.

Historians knew from public records that authorities hastily buried the dead to prevent an epidemic, but they didn't know where. The grave shows just how pressured they were.

"When they gathered up the bodies to cart them away, they also scooped up bits of whatever else was lying around," says Joao Luis Cardoso, a professor of archaeology at the Open University in Lisbon who oversaw the dig.

Cristiana Pereira, a forensic dentist at Lisbon University, was given 1,099 teeth from the grave.

Using the same procedures employed to identify victims in mass graves in the former Yugoslavia and from the 2004 Indian Ocean tsunami, she classified 79 victims, including babies.

The largest age group was 17-35, leading her to conclude the city had a young population. The teeth also showed few signs of decay, in part, presumably, because few people could afford the sugar imported from Portuguese colonial plantations in Africa and Brazil.

"It's all helping to fill in the blanks," she said.

The remains included a black woman. Other evidence of Portugal's slave-trading past were bones from a monkey — presumably a pet — and small sea shells that constituted currency for buying slaves.

Many skulls had been crushed, probably by quake-struck masonry and timber beams.

From a glass cabinet in his office, Telles Antunes pulls out the skull of a child about three years old. A small, sharp stone still juts from the skull, indicating a fatal injury from a collapsed building.

Scientists also analyzed charcoal, partly melted medallions and sand that had turned into glass — all dug out of the grave. They deduced that temperatures in the post-quake fire reached 1,800 degrees Fahrenheit.

The dog-bitten thigh bone suggests animals scavenging for food. The knife marks on another human bone imply meat was scraped from it, though some experts say the evidence of cannibalism is inconclusive.

Authorities sent troops to restore order, begin the cleanup and deal with looters. Two round lead bullets were found in the mass grave, and one skull had a hole that appeared made by a bullet.

"You can begin to imagine what a hellish time it must have been," says Telles Antunes.

Experts arrived at the estimate of 3,000 by extrapolating from what was found. Only a small part of the mass grave was excavated, and part of it is viewable by the public under glass.

"What we've found out so far is just the tip of the iceberg," says Cardoso, the archaeologist. "They'll still be researching this find long after I'm gone."

A new forensics report released by the National Explosives Task Force is shedding light on pipe bombs that were placed in Washington D.C. a day before the deadly riot January 6. CBS News senior investigative correspondent Catherine Herridge joins CBSN's "Red & Blue" anchor Elaine Quijano with the details on that plus the ongoing security threats at the Capitol.