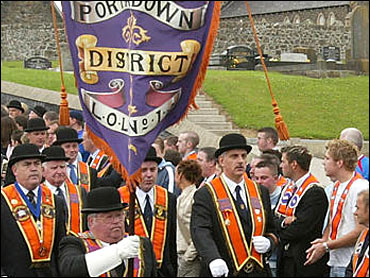 The annual marching season — historically a period of sectarian violence in Northern Ireland — returned to the streets this weekend with no incidents, say published reports.

The peaceful outcome was a promising sign for efforts to reconcile the Protestant majority with the growing Catholic minority, and came despite setbacks this year for the power sharing arrangements started under the Good Friday agreement.

The Northern Ireland assembly is currently suspended over a dispute between pro-British unionists and Irish Republican Army-linked Sinn Fein over the disarmament of the IRA and other paramilitary groups.

Sunday's parade in Portadown by the Orange Order, the major Protestant fraternal group, was barred from entering the town's Catholic district for the sixth year in a row.

However, unlike previous years, Protestant extremists didn't mount a protracted standoff with police and British soldiers.

According to the Belfast Telegraph, security officers were even beginning to dismantle some of the barricades they had erected in anticipation of trouble. The newspaper said it was the earliest the fortifications had been removed in years.

The annual marches commemorate major victories by Protestants in wars over the territory that now makes up Northern Ireland. They reach their height on July 12, the anniversary of the victory of the Protestant William of Orange over Catholic James II at the Battle of the Boyne in 1690.

Catholics long felt the marches, which often passed through Catholic-majority areas, were incendiary, and fought to have them banned.

Catholics were left as a minority in the six counties that became Northern Ireland when the lower 26 counties, which are mostly Catholic, split off in 1921. They eventually became the Irish Republic.

Former President Clinton expressed his pleasure Monday with the prevailing peace in the troubled province, a process he had promoted heavily while in office.

Mr. Clinton, who was in the British territory on Sunday for a speech and a round of golf, noted that a Protestant march that had previously been a cauldron for annual rioting passed off peacefully.

"So good that I felt comfortable going to Royal County Down to play golf," Mr. Clinton said. "It was an amazing thing."

"I think that shows you that, deep down inside, underneath all the factional disagreements and political factions, there is a conviction in both communities in the north that we ought to keep the peace," Mr. Clinton said.

The IRA has maintained a cease-fire since 1997 and has twice surrendered portions of its arsenal for decommissioning. But unionist parties want the group to disarm totally.

IRA supporters and other Republicans say that cannot happen until armed Protestant groups, such as the Ulster Defense Force or Ulster Volunteer Force, lay down their own arms.