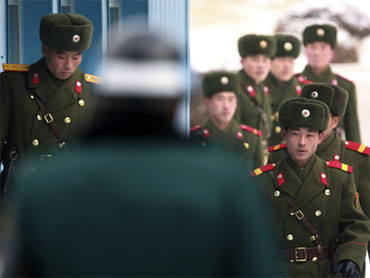 North Korea proposed peace talks to formally end the Korean War, saying Monday that improved ties with the United States and an end to sanctions are conditions for resuming international negotiations aimed at ridding it of nuclear weapons.

The North's call came as President Obama's special envoy for human rights in North Korea said earlier in the day during a visit to Seoul that any normalization of relations depends on an improvement in what he called the North's "appalling" human rights situation.

The North's Foreign Ministry said in a statement that the resumption of the six-nation nuclear talks depends on building confidence between Pyongyang and Washington and called for a peace treaty, which it has long demanded.

Before nuclear talks can get back on track, North Korea and the United States must improve their relationship by beginning talks aimed at signing a peace treaty to formally end the Korean War, which it called a "root cause of the hostile relations," the ministry said in a statement.

The 1950-53 Korean War ended in a truce, not a peace treaty, thus leaving the peninsula technically at war. North Korea, the U.S.-led United Nations Command and China are signatories to the cease-fire, while South Korea has never signed the accord.

North Korea pulled out of the six-party nuclear talks with the U.S., China, South Korea, Russia and Japan last year after international criticism of a long-range rocket launch that drew U.N. sanctions. It later conducted its second underground nuclear test.

"This appears to be an overture by the North Koreans to try and, in their own way, break through the logjam that we have seen for more than a year now in the talks," said Peter Beck, an expert on North Korea currently conducting research at Stanford University.

The proposal comes after a landmark visit to North last month by Stephen Bosworth, President Barack Obama's special envoy for the country. Bosworth said after his trip that the North agreed on the necessity of returning to the talks, though the country has not said when it would rejoin them.

Bosworth also said he conveyed a message from Obama calling for the "complete denuclearization of the Korean peninsula" and underlining Washington's willingness to help bring the isolated country back into the international fold. He said discussion of a peace treaty could take place within the six-party talks framework.

North Korea said after the meeting that the two sides discussed a wide range of issues including denuclearization, forging a peace treaty, improving bilateral relations and economic and energy assistance.

The six-party talks began in 2003, and in 2005 and 2007 there were agreements on a disarmament pact which calls for North Korea to end its nuclear programs in exchange for economic aid, security assurances and diplomatic recognition.

Robert King, Obama's special envoy for human rights in North Korea, harshly criticized the communist country Monday and said that the situation is preventing a normalization of relations.

"It's one of the worst places in terms of lack of human rights," King told reporters after meeting South Korea's foreign minister. "The situation is appalling."

He added, "Improved relations between the United States and North Korea will have to involve greater respect for human rights by North Korea."

North Korea has long been regarded as having one of the world's worst human rights records. The country holds some 154,000 political prisoners in six large camps across the country, according to South Korean government estimates.