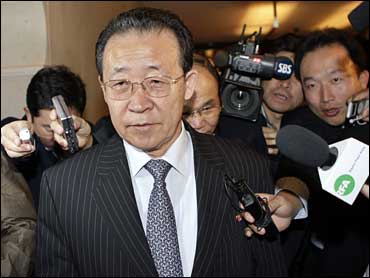 The United States has decided to remove North Korea from a list of terrorism-sponsoring states and lift sanctions against the communist country, North Korea's Foreign Ministry spokesman said Monday.

The U.S. decided on the move during a weekend meeting with North Korea in Geneva as part of its political and economic incentives to the North, the spokesman said in comments carried by the North's official Korean Central News Agency.

The move came after the North Korea agreed to take "practical measures to neutralize the existing nuclear facilities in the North" this year, the spokesman said.

"The U.S. decided to take such political and economic measures for compensation as delisting the DPRK as a terrorism sponsor and lifting all sanctions that have been applied according to the Trading with the Enemy Act," the spokesman said, using the initials for the North's official name, the Democratic People's Republic of Korea.

North Korea agreed Sunday to account for and disable its atomic programs by the end of the year, offering its first timeline for a process long sought by nuclear negotiators, the chief U.S. envoy said.

The deal was announced after the weekend talks in Geneva, the latest in a saga of negotiations and false hopes going back at least fourteen years since the North Korea is believed to have begun it's nuclear program, reports CBS News foreign correspondent Mark Phillips.

With their massive economic problems and need for huge food and fuel imports, it's been widely thought the North Koreans have been using their nuclear program as a very large bargaining chip, Phillips adds.

Kim Gye Gwan, head of the North Korean delegation, said separately his country's willingness to cooperate was clear - in return for "political and economic compensation" - but he mentioned no dates.

U.S. Assistant Secretary of State Christopher Hill said two days of talks between the United States and North Korea in Geneva had been "very good and very substantive" and would help improve chances of a successful meeting later this month with Japan, Russia, South Korea and China in six-nation talks aimed at ending the North's nuclear weapons program and improving relations between North Korea and other countries.

Hill said the declaration will also include uranium enrichment programs, which the United States fears could be used to make nuclear weapons.

"When we say all nuclear programs, we mean all," he said.

He said later in response to a question from The Associated Press that it was the first time that North Korea had ever offered a timeline for declaring and disabling its nuclear program.

Kim said, "We agreed a lot of things between the United States and the DPRK. We are happy with the way the peace talks went."

"We made it clear, we showed clear willingness to declare and dismantle all nuclear facilities," he said.

The agreement is "very significant, for sure," said Patricia Lewis, director of the U.N. Institute for Disarmament Research in Geneva, noting that North Korea had allowed U.N. inspectors back into the country and that they could verify what is declared.

"Confidence can increase and we can see whether or not it's really being shut down," Lewis said.

Hill declined to say whether the agreement would include more than the plutonium-producing nuclear reactor in Yongbyon, which North Korea shut down in July.

"We have to work out some of the details on that," Hill told reporters. "We will have a declaration in time to disable what needs to be disabled," he said, adding that "for example the Yongbyon reactor would have to be included."

He said he and Kim had discussed a range of issues in their two days of talks at the U.S. and North Korean missions to U.N. offices in Geneva.

Kim said one of those was North Korea's demand to be removed from the U.S. list of state sponsors of terrorism.

"In return for this we will receive political and economic compensation," he said. "We wouldn't be an enemy country anymore."

Hill said earlier Sunday that improving U.S. relations with North Korea will depend on other progress in the talks, saying it "is a relationship that we will continue to try to build step by step with the understanding that we're not going to have a normalized relationship until we have a denuclearized North Korea."

He said he expected the next full session of the six-nation talks in mid-September would produce a "more detailed implementation plan for 'disablement."'

The meeting in Geneva was part of a flurry of "working group" sessions called for in February's six-nation accord in which North Korea agreed to disable its plutonium-producing nuclear reactor and declare and eventually dismantle all its nuclear activities.

In exchange, the economically struggling North will receive oil and other aid. The U.S., as part of the agreement, promised to begin the process of removing the country from the terrorism list and work toward full diplomatic relations.

But he said it was important that North Korea declare all the uranium enrichment and plutonium stocks.

Years of tension and deadlock over North Korea's nuclear program, which peaked with the country's nuclear test last October, have started to ease in recent months as the talks have made progress.