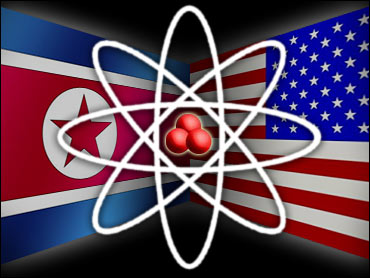 North Korea accused the United States on Tuesday of waging "psychological warfare" in an effort to overthrow its communist government, and President Bush appeared to brush aside a report that the North may have built another plutonium plant.

The North's official Minju Joson newspaper said Washington was using the same kinds of threats of overwhelming military might it employed against Iraq to intimidate North Korea, invade the country and overthrow its communist system.

"The Korean people are not a people to be afraid of or waver in the face of the U.S. imperialists' 'psychological warfare,'" the North's official news agency, KCNA, quoted the newspaper as saying.

"The more desperate the U.S. imperialists become in accelerating preparations for a war to invade (North Korea), the more resolute the Korean people get in their will and spirit to shower a fire of revenge upon the enemy," it said.

Spokesman Scott McClellan said the president "is not taking any options off the table."

At Panmunjom, the truce village on the border between the two Koreas, a U.S. official said Tuesday that the 50th anniversary commemoration of the armistice that ended the Korean War would be held in a "safe and secure environment."

Over 200 foreign dignitaries and more than 1,000 war veterans will attend the July 27 event at Panmunjom, said Brig. Gen. Thomas Kane, deputy chief of staff of the U.S.-led U.N. Command.

North Korea was not invited to the ceremonies, Kane said.

Asked at his ranch in Texas how concerned he was by evidence that North Korea may have begun producing plutonium for nuclear weapons at a new secret plant, Mr. Bush on Monday said: "The desire by the North Koreans to convince the world that they're in the process of developing a nuclear arsenal is nothing new."

His response was milder than in the past, when he warned that Washington would never allow North Korea to possess nuclear weapons.

At the same time, Mr. Bush urged North Korea's neighbors to join the United States in pushing the communist nation to drop its nuclear ambitions.

"I do believe we can solve this issue diplomatically by encouraging the neighborhood — the Chinese, the South Koreans and the Japanese — to join us with a single voice that says to Mr. Kim Jong Il, 'A decision to develop a nuclear arsenal is one that will alienate you from the rest of the world,' the president said at a Monday news conference at his Texas ranch.

The evidence of a new plutonium plant was reported by The New York Times, which quoted unidentified U.S. and Asian officials with access to intelligence on North Korea.

The report came amid efforts to reopen talks on the North's suspected nuclear weapons programs.

China, a longtime ally and key aid provider for North Korea, last week dispatched Vice Foreign Minister Dai Bingguo to the North and then to Washington to press for a new round of talks on the nuclear standoff.

North Korea has demanded one-on-one discussions with the United States, saying the nuclear issue is between Pyongyang and Washington. The United States says the issue is regional, and wants talks to include China, Japan and South Korea.

The nuclear dispute flared in October, when U.S. officials said North Korea admitted having a secret uranium-based nuclear program in violation of a 1994 agreement with Washington.