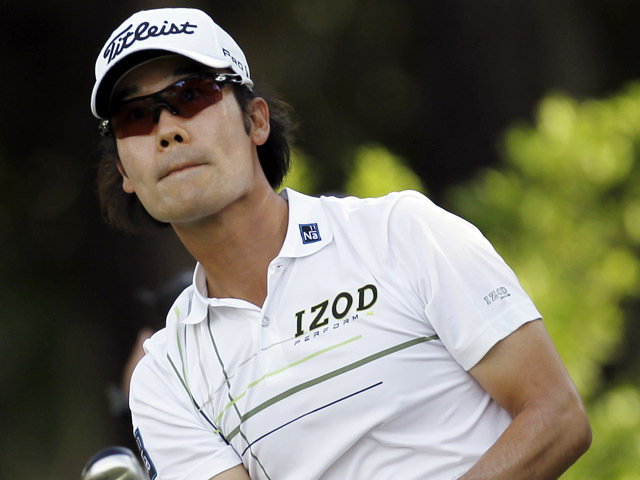 (AP) PONTE VEDRA BEACH, Fla. - Kevin Na is slow to pull the trigger, and quick to make fun of himself.

In what made for painful viewing Saturday in The Players Championship — for fans at the TPC Sawgrass and those watching from home — Na took hundreds of waggles as he set up over the ball, backed off the shot if he didn't feel comfortable and a couple of times purposely missed so he could start over.

The only number that mattered was a 4-under 68, one of only three bogey-free rounds on a dangerous golf course. Backing off only once in the 18th fairway, he hit his approach to 15 feet for birdie and took a one-shot lead over Matt Kuchar (69) going into the final round.

"There's so much on the line that I just have to sometimes back off," Na said. "Or I'll force myself to take it back, and on the way down I'll pull up and go over the top (of the ball). As ugly as it is, and as painful as it is, believe me, it's really tough for me. And I'm trying."

Kuchar had the lead until hitting wedge into the water at the island-green 17th and escaping with bogey, and he saved par from the rough-covered moguls to the right of the 18th green. He had one stretch of eight holes without a par, making six birdies and a bogey.

Rickie Fowler, coming off his first PGA Tour win last week at Quail Hollow, was dynamic as ever as he shot up the leaderboard. Fowler didn't make a bogey until the last hole but still had the best score of the third round with a 66 and was two shots behind. He is trying to become the first player since David Duval in 1997 to win his first two PGA Tour titles in consecutive weeks.

Na, playing with Zach Johnson, was on the clock throughout the back nine, and he was given a bad time on the 16th hole. He made an unsuccessful appeal, claiming he went over the allotted time because his caddie's shadow was in the way.

Na is not oblivious to how bad it looks, how slow he plays or the reaction from all corners.

"Trust me, I get ripped a lot," he said. "I know TV, Twitter and fans are tired of me backing off. I understand people being frustrated with me backing off, but all I can tell you guys is honestly, I'm trying. And it's hard for me, too.

"But just bear with me, and hopefully we get that tomorrow round in."

Na, who won for the first time last fall in Las Vegas, was at 12-under 204. The 54-hole leader has not won The Players Championship since it moved to May in 2007, and a one-shot lead is never safe at Sawgrass.

Texas Open champion Ben Curtis also played bogey-free. He just didn't have as many birdies, missing from inside 10 feet on his last two holes for a 70. He was five shots behind, along with Johnson, who bogeyed the last hole for a 73.

Tiger Woods never came close to getting into contention, though he gave himself plenty of chances. The card shows two birdies, two bogeys and a 72 that left him 10 shots out of the lead going into the final round. It was hard for him to digest.

"I played well today and didn't get anything out of that round," Woods said. "It was probably the most solid I've hit the golf ball all year, actually. Even though I hit a couple off line, they were just hit dead flush. I just got nothing out of the round."

Na, long known as one of the slowest players in golf, attributes his bizarre routine of waggles and whiffs to a swing change. He and Johnson, also known for his slow pace, were on the clock throughout the back nine. Na was given a bad time on the 16th hole while on the clock, meaning one more bad time and he would have become the first PGA Tour player in 20 years to get a one-shot penalty.

He appealed the bad time — and lost — claiming his caddie's shadow was in the way and he had to back off. Na was not on the clock playing the last two holes.

Na is equally famous for taking a 16 on one hole in the Texas Open last year. It didn't take nearly as much time to take those 16 shots, though Na explained he plays more quickly when he's in trouble. He said it's takes longer to get a clear picture in his head when playing from the fairways.

"It's probably when I'm in the trees I hit it faster," he said. "But I don't want to play from the trees."

Na said players tell him they get the short straw when paired with him, and they are only half-kidding. After backing off one shot on the sixth tee, he apologized to Johnson.

"I'm good friends with Zach, and Zach understands," Na said. "I think the only guy that would really understand is Sergio (Garcia) if I played with him, because he's gone through it."

Garcia struggled with re-grips and waggles in 2002 and was hammered by the New York gallery in the U.S. Open at Bethpage Black. Na better get this fixed quickly — The Barclays is going to Bethpage in August.

"I know it's frustrating," he said. "It's frustrating for me. I want to pull the trigger. ... It's getting better little by little. Hopefully, it will go away by the end of the year."

The first step is getting through Sunday.

Kuchar, who also challenged at the Masters, is getting by with control of his driver and his emotions. Even on a poor tee shot at the 14th, the worst Kuchar could say was, "Oh, stinker!" What cost him more was a ball sinking to the bottom of the pond at the 17th, though Kuchar can't argue with his position in the last group Sunday.

Fowler still sees himself as an underdog, even though he broke through last week at Quail Hollow to win in a playoff that included Rory McIlroy. The last player to win consecutive weeks on tour was Woods in 2009. Woods, Tom Kite in 1989 and Raymond Floyd in 1981 are the only players to make that second straight win The Players Championship. Fowler figured no one gave him much of a chance.

"I feel like I'm in kind of an underdog position — maybe overlooked at the start of the week, won last week, maybe a little tired," Fowler said. "I'm ready to go. Like I said last week, it's all about giving yourself chances out here, and I gave myself a chance last week on Sunday and took advantage of it. Go out tomorrow, have some fun, give it our best shot and see where that puts us."