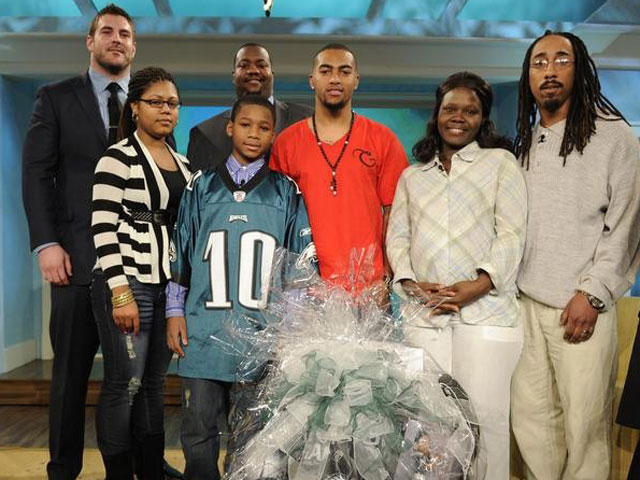 NEW YORK (CBS) A Pennsylvania teen who was beaten by several classmates in a attack caught on video tape got a big surprise when he appeared on "The View" Thursday.

Three members of 13-year-old Nadin Khoury's favorite football team, the Philadelphia Eagles, came on the program to meet him.

Wide receiver DeSean Jackson, center Jamaal Jackson and Todd Herremans came to greet Khoury after his interview and praised him for his bravery.

"You're brave, because this happens every day and people are not brave enough to stand up and take this on," Jackson told him. The wide receiver then took the jersey off his back, signed it, and gave it to the teen, and made him an honorary member of the Eagles.

"Anytime ever you need us, I've got two linemen right here ... my boys are ready to come down," he said.

Khoury was kicked, dragged through the snow and then hoisted into a tree, allegedly by six of his classmates. When he tried to run away, he was hung by his coat on a tall metal fence. One of the accused students videotaped the attack on his cell phone.

On the program, he said he was bullied because of his size and because his mother is African-American and speaks with an accent.

You can watch the video here.