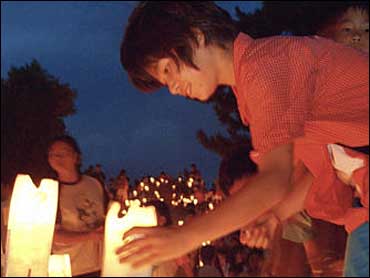 The mayor of Nagasaki marked the 57th anniversary of the atom bomb attack on his city Friday by lashing out at the United States and accusing the U.S. of reversing efforts toward global nuclear missile disarmament.

Itcho Ito said Washington's withdrawal from the 1972 Anti-Ballistic Missile Treaty with Russia and its rejection of the 1996 Comprehensive Test Ban Treaty threatens to roll back the movement to prevent nuclear war. He called for the formation of a nuclear-weapons-free zone in Asia.

"We are appalled by this series of unilateral actions taken by the government of the United States, actions which are also being condemned by people of sound judgment throughout the world," Ito said in his annual peace declaration, broadcast nationwide on TV.

Ito also urged Japan to forge agreements with countries in northeast Asia to ban nuclear weapons. He suggested that Tokyo should stop relying on Washington's "nuclear umbrella" for protection.

Prime Minister Junichiro Koizumi, attending the ceremony, reaffirmed the government's anti-nuclear stance, known as the "three non-nuclear principles," which some politicians had recently hinted might be revised, and others suggested be elevated to the status of law.

"There will be no change in the three non-nuclear principles," pledged Koizumi. "We want to take a lead in international society in working toward a safe and peaceful world with no nuclear weapons."

The United States officially abandoned the ABM treaty in June, six months after President Bush announced he would do so to pursue a national missile defense system, which the treaty had forbidden.

The Bush administration also said it no longer supports the Comprehensive Test Ban Treaty and won't send it to Congress for ratification, even though the United States signed the accord.

Washington has had a self-imposed ban on nuclear testing since 1992.

"We will continue to press other countries to carry it out," Koizumi said. "We will also stand at the forefront of global efforts to oppose nuclear proliferation and promote the reduction of nuclear armies and the abolition of nuclear weapons."

In Friday's ceremony, survivors, residents, lawmakers and foreign dignitaries stood in silence as a bell tolled and an air-raid siren wailed for 60 seconds at 11:02 a.m. - the minute when a U.S. warplane dropped the atomic bomb dubbed "Fat Man."

About 5,500 people attended the hour-long ceremony, and tens of thousands more paid their respects to the dead throughout the day, said city official Kimiko Ieiri.

The bomb dropped on Nagasaki on Aug. 9, 1945 killed about 70,000 people. This year, the city added the names of 2,564 people to a list of those who have died from long-term illnesses linked to the bombing, putting the total number of victims at 129,193, Ieiri said.

On Tuesday, an estimated 45,000 people gathered in Hiroshima to remember 160,000 people killed or injured in the world's first atomic bomb attack there on Aug. 6, 1945.

The Nagasaki and Hiroshima ceremonies are among a series of memorials held every summer to honor Japanese who died in World War II. Meanwhile, the government continues to grapple with its own militaristic past.

Japan's government denies any liability, saying the compensation issue was settled by treaties signed after the war.