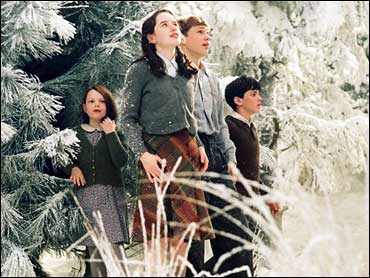 "The Chronicles of Narnia: The Lion, the Witch and the Wardrobe" snatched the box office crown from "King Kong" during another fierce four-day holiday battle for the top spot.

Less than $2 million separated "Kong" and "Narnia" each of the past two weekends.

"We edged out `Kong.' It's been neck-and-neck," Buena Vista's Dennis Rice said Monday. "These are two great movies in the marketplace that are doing great business."

"Narnia" took in an estimated $32.8 million from Friday through Monday, nudging Universal's "King Kong" out of the No. 1 spot and into second with a New Year's weekend gross of $31.6 million.

"This is a great way to start the new year. We have an up weekend, 5 percent over the last New Year's weekend," said Paul Dergarabedian, president of box office tracker Exhibitor Relations Co. Inc. "Propelled by these two blockbusters, it's really moving the box office."

"Fun With Dick and Jane" was in third place with $21 million, followed by "Cheaper by the Dozen 2" with $19.3 million, a 26 percent jump over the previous weekend. Jennifer Aniston's "Rumor Has It" was fifth with $11.6 million.

"The Family Stone" was sixth with $10.2 million, "Memoirs of a Geisha" was seventh with $10 million and "The Ringer" was eighth with $8 million. Ninth place was held by "Harry Potter and the Goblet of Fire," with $7.5 million. It has taken in $277 million in seven weeks of release.

Steven Spielberg's "Munich" rounded out the Top 10 with $6.1 million.

Estimated ticket sales for Friday through Sunday at U.S. and Canadian theaters, according to Exhibitor Relations. Final figures will be released Tuesday.