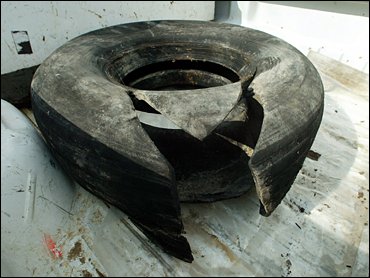 A NASA safety engineer wrote two days before Columbia's mysterious breakup about risks to the shuttle from "catastrophic" failures caused by tires possibly bursting inside the spacecraft from extreme heat during its fiery descent, the space agency disclosed.

Robert H. Daugherty, responding to an inquiry from Johnson Space Center, cautioned in an e-mail to NASA colleagues that damage to delicate insulating tiles near Columbia's landing gear door could cause one or more tires inside to burst, perhaps ending with catastrophic failures that would place the seven astronauts "in a world of hurt."

Such an explosion inside Columbia's belly, Daugherty predicted, could blow out the gear door and expose the shuttle's unprotected innards to searing temperatures as it raced through earth's atmosphere.

On the same day NASA disclosed the contents of Daugherty's e-mail, searchers near Hemphill, Texas, about 140 miles northeast of Houston, recovered what they believed to be one of Columbia's tires. It sustained a massive split across its tread, but it was impossible from photographs to know whether the tire was damaged aboard Columbia or when it struck the ground.

NASA officials in Washington said Wednesday they could not confirm the tire was the shuttle's.

For the first time, the man in charge of Mission Control during the Columbia accident talked Wednesday about what happened inside the steel doors, reports CBS News Correspondent Peter King.

Flight Director Leroy Cain says Columbia had been out of touch for several minutes before anyone really knew what happened.

"I was not convinced that it really was anything more than a short duration loss of comm [communications] which is not uncommon for entry," Cain said.

Cain says they were coming up on a time to switch satellite antennas, which would have meant lost contact anyway. His team kept trying to call Columbia, but the moments became minutes.

"We didn't expect it to be that long," he told reporters in a teleconference. "I had brief moments in that time frame of concern."

Although the repeated calls proved to be futile, Cain said, his flight controllers stayed calm.

Then Mission Control received a call from someone claiming to have seen the shuttle break up, but until there was proof, he wasn't ready to believe it. The proof came when he saw the first video from Dallas.

"That was the one point, of course, that was confirmation," Cain said.

In his e-mail, which included remarkably strident language, Daugherty wrote that even if astronauts survived the heat, the blast could damage critical systems inside the wheel compartment, prevent the landing gear on one side from lowering, necessitate a risky belly landing or force the crew to bail out.

Bailing out would be "not a good day," he wrote. But attempting to fly the shuttle with only one side's landing gear lowered would be worse: "You're finished."

Cain said Wednesday that investigators were confident the gear door did not fall off in flight because such a failure would have been indicated on sensor readings.

Other NASA officials have cited mysterious sensor readings in the wheel well moments before Columbia's breakup but have said they were confident the tire didn't burst inside the shuttle.

Daugherty acknowledged these were "absolute worst-case scenarios," adding, "I don't really believe things are as bad as I'm getting ready to make them out." But he defended raising the issues in e-mail to avoid a "gut-wrenching decision" days later during Columbia's descent.

Daugherty on Wednesday referred questions about his concerns to a NASA spokesman. Agency officials indicated they did not want reporters to speak with Daugherty because accident investigators had not yet questioned him. NASA disclosed the contents of his e-mail Wednesday.

The e-mail from Daugherty, an engineer at NASA's Langley research facility in Hampton, Va., was prompted by a telephone call Jan. 27 from experts at the Johnson Space Center in Houston who asked what might happen if Columbia's tires were not inflated when it attempted to land.

The inquiry from Johnson has attracted interest because it came four days after engineers at The Boeing Co., a contractor, assured NASA that Columbia could return safely despite damage to left wing tiles that might have occurred on liftoff.

Senior NASA officials said Daugherty's concerns were part of a "what-if" analysis by a small group of engineers who already had been assured that Columbia would land safely. They acknowledged that concerns about threats to the shuttle's tires were not passed along to NASA flight directors.

However, Heflin couldn't say whether anyone at NASA knew of both the e-mail messages and a Boeing study on the protective tiles that said losing some tiles in that area of the shuttle wouldn't be a flight safety issue.

An e-mail back to Daugherty the next day from a Johnson Space Center engineer, David F. Lechner of the United Space Alliance LLC, another NASA contractor, thanked Daugherty for his "candid remarks." He said they "generated extremely valuable discussion in our group."

"We hope the debris impact analysis is correct and all this discussion is mute," Lechner wrote.

Another Langley employee, Mark J. Shuart, responded by e-mail later that day, "Looks like they believe all this has been addressed." His message was time-stamped about 20 hours before the shuttle disintegrated.

Testifying at a joint congressional hearing Wednesday, NASA Administrator Sean O'Keefe told lawmakers that during Columbia's 16-day mission, "there were no abnormalities that would suggest a problem. If there was any indication, they would have showed up."

Among the earliest warning signs aboard Columbia in the minutes before its demise was an unusual heat buildup of about 30 degrees inside the left wheel well. Investigators have said they are confident the tire inside didn't deflate, but they have been unable to explain the readings.

"There is nothing that is not on the table" in terms of NASA accountability, said O'Keefe. "We will be guided by what the commission says" and "you have our assurance that this distinguished board will be able to act with genuine independence."

Cain counted the astronauts as friends, and said Wednesday he's determined to find out what happened.

"Are there difficult times? Absolutely," he admitted. "This was a crew that I was particularly close to, and it was a crew that it was very easy to fall in love with, in my opinion."

His crew now continues to work on a timeline of the re-entry.

"We are professionals, and the Columbia crew would want us to," he said. "I believe they would be proud of our behavior here in the last several days and weeks."