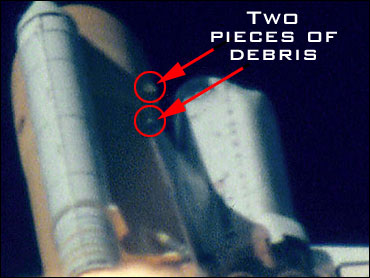 NASA is not ready to say it has found the smoking gun, but there is some evidence that the tragic end of space shuttle Columbia may have actually begun with its launch, reports CBS News Correspondent Bob Orr.

About 80 seconds after Columbia lifted off, a large piece of thermal insulation broke loose from the external fuel tank and struck the left side of the orbiter.

A videotape released Monday by NASA shows the debris clearly hitting the bottom side of the left wing and disintegrating into what appears to be a cloud of dust.

Meanwhile, as the search expanded for debris from the explosion, crews found the front of the space shuttle Columbia's nose cone buried deep in the ground in Texas near the Louisiana border, officials said Monday night.

"It's reasonably intact," said Warren Zahner, a senior coordinator for the Environmental Protection Agency. Other officials said a crew was to return to the site on Tuesday to excavate the nose cone.

NASA engineers say the shuttle may have suffered "localized damage" to the heat shield needed to protect the spacecraft on its fiery re-entry. By NASA's calculations, the shuttle, in a worst-case scenario, may have lost several tiles over a narrow two-and-a-half-foot area on the bottom of the spacecraft.

"Analysis predicted that even if you had localized structural damage it was not sufficient to cause a catastrophic event," said shuttle program manager Ron Dittemore.

But it's possible the debris strike may have done more damage than first thought.

Dittemore said NASA was particularly interested in any pieces that may have fallen from Columbia as far west as New Mexico, Arizona or California. The FBI was checking reports of possible debris in Arizona.

"It's like looking for a needle in a haystack," Dittemore said, referring to tracking bits of the 6-by-6 inch thermal tiles that covered Columbia. "But that is not going to keep us from looking for it."

As the shuttle crossed the California coast, sensors in the left wheel well alerted Mission Control to a buildup of heat. Another sensor, above the wing on the left side of the fuselage, showed an even higher temperature spike – possible signs that some heat tiles had cracked or broken off.

And the shuttle's flight computers struggled to compensate for heavy "drag on the left wing" before control was eventually lost; a scenario which could have been caused by a damaged wing.

CBS News Space Analyst Bill Harwood says there are reasons to believe the debris strike and the breakup are related.

"It obviously hit the wing and you have telemetry from the shuttle during re-entry that's showing some kind of thermal distress, high temperatures, heating effects in the left land gear of the left wing which is pretty close to where this hit," says Harwood

In an interview with CBS Evening News Anchor Dan Rather, NASA administrator Sean O'Keefe said some damage to the heat tiles was normal during re-entry.

"It is not unusual at all on every single flight to see evidence of streaking on the tiles when the orbiters return," said O'Keefe.

But investigators who desperately need wreckage for forensic evidence have no better theory at the moment. While they have doubts the debris strike could have set up a fatal sequence of failures, they can't rule it out.

"Everyone has leaped to the conclusion that was the cause," said NASA's top spaceflight official, William Readdy, "I'm not ready to say that." However, he noted: "That is certainly the leading candidate right now, but we have to rule things out."

Two days after the shuttle's loss, Mr. Bush spoke of the crew's commitment to science while promoting his $6 billion plan to help scientists create vaccines and treatments against bioterrorism.

"The seven brave men and women from the Columbia will be remembered for their achievements, their heroism and their sense of wonder," Mr. Bush said at the National Institutes of Health.

The president is proposing a nearly $500 million increase in NASA's budget as part of his overall federal spending blueprint for fiscal 2004, a figure set before the weekend catastrophe.

Mr. Bush and first lady Laura Bush will attend a memorial service Tuesday for the fallen crew of the Columbia at NASA's Johnson Space Center in Houston.

Also Monday, the Senate passed a resolution honoring the astronauts killed in the disaster, then adjourned out of respect for the dead. Many members of Congress plan to join the president at a memorial service Tuesday in Houston.

In a statement, the astronauts' families said their loved ones had joined their final mission with "a willingness to accept the risk in pursuit of knowledge – knowledge that might improve the quality of life for all mankind."

The families thanked people the world around "for their incredible outpouring of grief and support," and insisted, "The exploration of space must go on."

"The legacy of Columbia must carry on for the benefit of our children and yours," it read.

Using plastic bags and buckets, searchers hunted down remains and debris in the rivers and woods of Louisiana and Texas — including a 6-to-7-foot chunk of cabin found in one rural county. Environmental and explosives experts, along with NASA officials, bagged up wreckage and transported it to airports now serving as evidence warehouses.

"We are collecting material that we find on the ground even as small as a quarter," said Gary Moore, a regional coordinator for the Environmental Protection Agency. "Obviously, you're going to get to a point where you can't collect every single speck."

Eventually, the material will be shipped to Barksdale Air Force Base in Louisiana, where it was being collected in a sprawling hangar. The goal is to try to reconstruct what's left of Columbia, and establish a sequence of how each part peeled off during the shuttle's ill-fated journey home.

On Monday, debris and human remains from the destroyed shuttle began arriving at the base "in everything from helicopters to rental cars," NASA spokesman Steve Nesbitt said.

NASA examiners and the independent investigative team headed by retired Adm. Harold W. Gehman Jr. have set up shop at the base in a room with a large map, using pushpins to mark the thousands of debris sites. The map was color-coded according to the size of the particles.

The recovery effort is daunting due to the size and scope of the debris field. It stretched west to east 380 miles from Eastland, Texas, to Alexandria, La., and north-south 230 miles from Sulphur Springs, Texas, to metropolitan Houston.