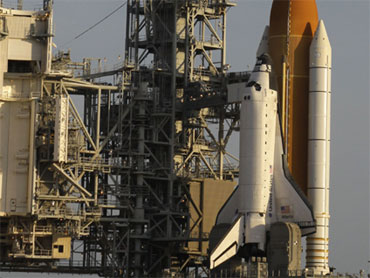 NASA fueled space shuttle Atlantis on Friday for its final journey, a delivery trip to the International Space Station that will provide fresh batteries and extra room.

Atlantis was slated to blast off at 2:20 p.m. Everything was going well in the countdown and the weather was looking favorable. Forecasters were sticking with their 70 percent odds of good weather, but a NASA spokesman said that likely would improve as the morning wore on.

The launch team began pumping more than 500,000 gallons of fuel into Atlantis' massive external tank well before dawn, just as the six astronauts assigned to the mission woke up. The all-male crew downed a hearty breakfast: medium-rare steaks and French fries for three of them, a cheeseburger for another and sandwiches for the remaining two.

The 12-day mission is the last one for Atlantis, the fourth in NASA's line of space shuttles. Only two flights remain after this one, by Discovery and Endeavour. NASA hopes to end the 30-year program by the end of this year.

Atlantis rocketed into orbit for the first time in 1985. This will be its 32nd trip and the 132nd shuttle flight overall.

The shuttle is loaded with fresh batteries and a Russian-built compartment for the space station.

The 20-foot-long module is crammed with food, laptop computers and other U.S. supplies, part of the deal worked out between the two countries' space agencies. There's so much gear inside that the space station crew will wait until Atlantis leaves before unpacking everything.

Commander Kenneth Ham and his crew will install the compartment on the space station, and carry out three spacewalks to replace six old batteries and hook up an antenna and other spare parts.

Dozens of Russians were expected, as well as about 150 Twittering guests. This is the second time NASA has opened the launch site to so-called tweeters. A NASA spokeswoman said it's a way to spread the message and get the public excited about space, as the shuttle program winds down.

President Barack Obama wants NASA to focus on getting astronauts to an asteroid by 2025 and into orbit around Mars by 2035. He canceled the previous administration's Constellation program, considered a continuation of the 1960s Apollo moon program.

The space station, meanwhile, will keep operating until at least 2020. Under the Obama plan, NASA astronauts will keep hitching rides aboard Russian Soyuz rockets until U.S. private enterprise can develop spacecraft to safely get humans into orbit.

As for Atlantis, it will be prepped for a possible rescue mission for the very last shuttle flight, once it returns from the space station. Its ultimate destination will be a museum somewhere in America. The resting spot has yet to be chosen.