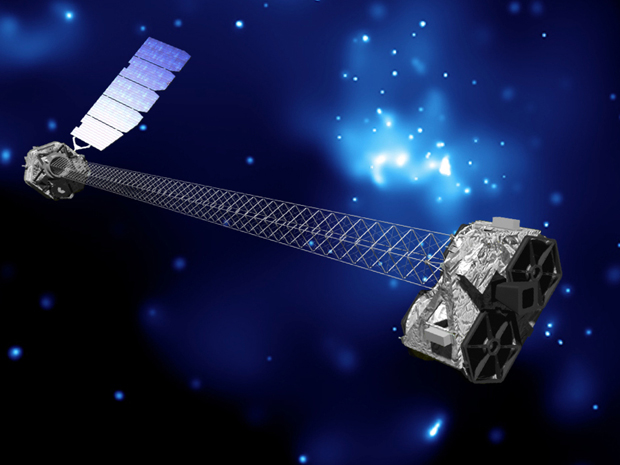 A NASA space telescope studying X-ray emissions from a nearby galaxy has discovered the brightest pulsar ever detected, the fast-spinning remnant of a collapsed star that shines so intensely it was initially mistaken for a massive black hole, a possible "missing link" between compact stellar-mass black holes and the unseen monsters lurking at the cores of many galaxies.

While the brilliant pulsar may, in fact, become a black hole some day, it is not yet a member of the family tree. But theorists cannot explain how an object just one-and-a-half times as massive as the sun can suck in enough raw material to generate the high-energy X-ray emissions detected by NASA's Nuclear Spectroscopic Telescope Array, or NuStar.

"Today we're announcing the discovery of a pulsating dead star that's beaming X-rays with the energy of about 10 million suns," said Fiona Harrison, NuSTAR principal investigator at the California Institute of Technology in Pasadena, Calif.

"This dead star, called a neutron star, packs about the mass of the whole sun into a region the size of San Francisco. Yet this little mighty mouse pulsar packs the power of a much bigger black hole. The discovery is astonishing, because no object like this has ever been observed to be even remotely this bright. Theorists didn't think that it was possible."

The pulsar was found at the heart of a galaxy known as M-82, some 12 million light years from Earth. Also known as the "cigar galaxy" because of its oblong shape, M-82 is a favorite target for amateur astronomers, bright enough to be seen in relatively small telescopes. Larger instruments reveal huge, distinctive jets of material streaming away from the galaxy's core at right angles to its disk.

"There are pulsating neutron stars in our galaxy," Harrison said. "We think they work similarly to this new source, the only thing is they are much dimmer, more than 10 times fainter, even the very, very brightest ones are 10 times fainter than this. So there are probably some new physics going on here, some new process that we don't yet understand that can make this so bright."

When stars use up all of their nuclear fuel, the energy generated by fusion in the core stops and gravity takes over, causing the core to collapse. Stars like the sun can only collapse so far, becoming white dwarfs that slowly cool over billions of years.

Black holes, by definition, are invisible because of gravity so extreme nothing, including photons, can escape to the outside universe. But gas and dust sucked into a black hole are accelerated to extreme velocities, crashing into each other in a swirling disk, generating friction and extreme temperatures.

Close in to the black hole, just outside the "event horizon" beyond which nothing can escape, conditions are so extreme high-energy X-rays are generated that NuStar can detect.

Astronomers have been looking for a so-called "missing link" between stellar-mass black holes and the supermassive black holes found at the centers of most, if not all, large galaxies. One candidate for that missing link may be ultra-luminous X-ray sources, believed to be black holes of intermediate mass between the two ends of the family tree.

Astronomers already found one such black hole in M-82, known as X-1, that is 400 times as massive as the sun. The NuStar telescope found another, slightly dimmer source of high-energy X-rays nearby that is known as X-2. Astronomers initially thought it, too, must be a black hole like X-1. As it turns out, X-2 is only about 1.5 times as massive as the sun, taking 1.37 seconds to complete one revolution.

But it shines 10 times brighter than any pulsar previously discovered, bright enough for astronomers to mistake it for a black hole.

"The ultimate source of this object's power comes from the high rate at which it is feeding, or accreting, matter from a companion star," Harrison said. "High feeding or accretion rates are important for growing black holes in the early universe. This affects the formation of galaxies and structures in the universe, and studying objects like this helps astronomers understand this important process."

But they do not yet know whether X-2 is a unique object, the first of a new class of objects or how it generates its extreme emissions.

"Even with a black hole 50 to 100 times the mass of the sun, the feeding rate implied is pretty extreme," Harrison said. "Then, we discovered that rather than just being extreme, the object is, in fact, astonishing."

Jeanette Gladstone, an astronomer at the University of Alberta, Canada, said X-2 must be consuming material from a nearby star at rates "that are extreme for stellar remnant black holes. So this is quite exciting."

"The sources in M-82 are really kind of challenging theories and pushing our limits and understanding of ultra-luminous X-ray sources, but also neutron star physics," she said. "It's also going to give theorists a challenge trying to explain how neutron stars and black holes can feed at these rates."

The $180 million NuStar spacecraft, built by Orbital Sciences Corp., was launched in June 2012. Built around an extendable 33-foot-long Tinkertoy-like mast with nested X-ray mirrors on one end and sensitive detectors on the other, NuStar was designed to study black holes, the mechanics of supernovas, the creation of heavy elements in stellar explosions and how super-massive black holes affect galaxy formation and evolution.

Unlike optical telescopes that use multiple mirrors to bounce focused starlight to detectors, penetrating X-rays are focused by cylindrical, nested mirrors that slightly bend the trajectories of incoming X-ray photons. A long separation between the mirrors and detectors is required to bring the radiation to a focus.

Earlier X-ray telescopes, sensitive to lower energies, were heavy and while relatively short, they required large launch vehicles. NASA's Chandra X-ray Observatory, one of the agency's "Great Observatories," weighed more than six tons and was launched by the shuttle Columbia. NuSTAR tips the scales at just 770 pounds. The extendable mast providing the required separation between mirror and detectors fit inside a 3.3-foot-tall canister at launch.