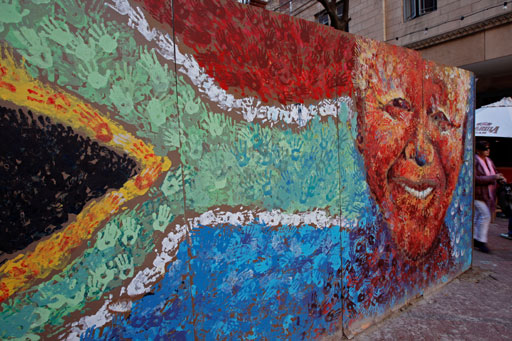 The computer network, which links local resident registries across the nation, has been a flashpoint of controversy since its inception. Opponents say it tramples individual privacy and can be used by the government to quell public dissent.

About 70 people demonstrated against the system Monday morning in front of Japan's Public Management Ministry in downtown Tokyo.

A group of academics and activists presented the Home Affairs Ministry with a petition demanding the government halt the program, which links municipal computer systems and gives each Japanese citizen an 11-digit identification number.

They filed a court case at the end of last month, demanding the system be abolished because it was unconstitutional.

"We don't want to be under government surveillance, stop the resident registry system," shouted a small band of protesters outside the ministry.

With one of their number dressed up to look like a computer and another as Prime Minister Junichiro Koizumi, the demonstrators danced and put on a short sketch to illustrate their objections to the system.

As the system got up and running, several municipalities - in the western prefecture (state) of Kyoto and the central region of Toyama - also reported temporary computer glitches that prevented them from tapping into the national network, local officials said.

Even before Monday's kickoff, the ID system was undermined by five municipalities refusing to register their information, and by Yokohama, a city of 3.4 million people, saying it would register information only from those who consent.

The mayor of Kokubunji - one of the municipalities opposing the system - terminated his city's connection to the network at a Monday morning news conference.

"It is regrettable that this has to be done, but the people have not been properly consulted about this system," Nobua Hoshino said.

Public Management Minister Toranosuke Katayama defended the system, saying "if there are places that remain opposed to the system, I would ask for more dialogue so that we can reach an understanding."

The new resident registry system assigns an 11-digit identification number to each citizen - much like the U.S. social security number - to be used by the government to draw up basic information on the person limited to name, address, sex, and birth date.

Sharing information on Japan's 126 million citizens among municipal, prefectural and national governments is meant to cut down on bureaucratic red tape.

Currently, Japanese often have to pay numerous visits to various government offices in order to complete a single administrative procedure, such as registering a change of address. Records are often filed on paper and identification can require obtaining a slew of documents - a process the new system aims to streamline.

Opponents of the new ID system fear that something sinister is at work and that the new system gives authorities a tool to harass and silence critics.

"This system treats individuals as things, not people," said Hirohisa Kitano, a legal expert and emeritus professor of Nihon University, said at a news conference.

"The Nazis assigned numbers to Jewish people in exactly the same way. It is extremely dangerous, " he added, explaining that he feared a return of the surveillance of citizens common under Japan's militarized system before and during World War Two.

Critics say introduction of the system could mean an array of personal data is stored at different locations, allowing hackers to make mischief.

The government says it has created a security system that can detect suspicious access to the database.

"It's quite common to feel uneasy about something new. We want to keep explaining until such anxieties disappear," said Chief Cabinet Secretary Yasuo Fukuda.