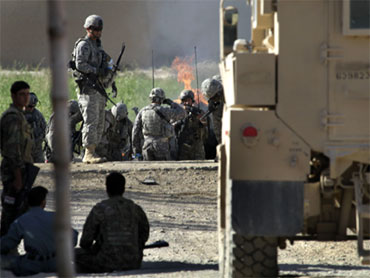 No details were given of the attacks, although eyewitnesses in the southern city of Kandahar said an armored U.S. Army Humvee hit a roadside bomb in the early afternoon. Several bodies were seen being removed from the vehicle, which was set on fire by the blast.

The deaths bring to 14 the number of U.S. troops killed in action in eastern and southern Afghanistan over the past three days.

A spike in U.S. troop numbers in Afghanistan to over 120,000 has brought increased contact with insurgents and a rising death toll. Forty-nine U.S. service members have died in Afghanistan this month, still fewer than the 66 killed in July.

Two servicemen died in bombings Sunday in southern Afghanistan, while two others were killed in a bomb attack in the south on Saturday and three in fighting in the east the same day, NATO said. Their identities and other details were being withheld until relatives could be notified.

To the east in Nangarhar province, the head of Lal Pur district, Syad Mohammad Palawan, was killed when a bomb planted on his vehicle exploded as he was driving into a government compound to attend a meeting of provincial security and political leaders, said police spokesman Ghafor Khan.

Insurgents apparently planned for the bomb to explode inside the compound in the provincial capital Jalalabad where it could potentially have caused far greater destruction, Khan said.

Three of Palawan's bodyguards were wounded, Khan said, while the Interior Ministry put the figure at five.

The attack followed a failed assault on two coalition bases in nearby Khost province Saturday, in which more than 30 insurgents were killed. The attacks indicate that militant activity is rising in parts of the east, as coalition forces focus resources on Kandahar and other Taliban strongholds in the south.

Security in eastern Afghanistan is critical because the region includes the capital, Kabul, which the insurgents have sought to surround and isolate from the rest of the country. Jalalabad also lies just 35 miles (55 kilometers) west of the Pakistan border, where militants maintain safe havens from which to plan attacks and infiltrate foreign fighters linked to al Qaeda across the rugged mountains.

Shutting down such sanctuaries has been a key demand of the government of President Hamid Karzai, who on Saturday renewed his criticism of coalition strategy in fighting Afghanistan's stubborn insurgency - part of a pattern of greater outspokenness by the Afghan leader as he appeals for support among the beleaguered Afghan public.

In a meeting with visiting German Parliament Speaker Norbert Lammert, Karzai said there was a "serious need" to alter strategy against the Taliban and other groups linked to al Qaeda, the presidential office said.

"There should be a review of the strategy in the fight against terrorism, because the experience of the last eight years showed that the fight in the villages of Afghanistan has been ineffective apart from causing civilian casualties," Karzai was quoted as saying in a news release.

Karzai has in the past argued Afghan forces should take the lead in operations to root out insurgents and win support from deeply conservative villagers who harbor a long tradition of suspicion of outsiders. He says personal contact between coalition forces and villagers only breeds resentment, although most Afghan police and soldiers are drawn from northern Uzbeks and Tajiks who are ethnically and linguistically distinct from the Pashtuns who make up the core of Taliban support.

Last week, Karzai also criticized the U.S. plan to begin withdrawing troops starting next July and said the fight against terrorism cannot succeed as long as the Taliban and their allies maintain safe havens in Pakistan.

Karzai's comments contradict statements from coalition commanders that an increase in the total number of foreign forces to more than 140,000 has turned the momentum of recent Taliban advances.

In other operations, NATO said combined coalition and Afghan forces detained several suspected Taliban in Kandahar province, including regional commanders and bomb-makers, as well as insurgents involved in Saturday's attacks on Forward Operating Base Salerno and Camp Chapman in Khost. Chapman was the scene of a suicide attack in December that killed seven CIA employees.

In the southeastern province of Zabul, 24 Taliban traveling by truck and motorcycle were captured while trying to cross the border into Pakistan, said provincial government spokesman Mohammad Jan Rasoolyar.

Five Taliban, including one regional commander, were also killed in fighting with coalition forces Sunday in Helmand province's Gereshik district, according to Daoud Ahmedi, spokesman to the provincial governor.

Taliban insurgents have been waging a campaign of murder and intimidation in hopes of sabotaging the Sept. 18 parliamentary polls.

While streets in the capital Kabul are festooned with campaign posters, many Afghans say they don't plan to vote, either because of safety concerns or cynicism over ineffective government and widespread corruption.

Electoral officials cut the number of nationwide voting sites for the elections by nearly 1,000 to 5,897 because of security concerns.