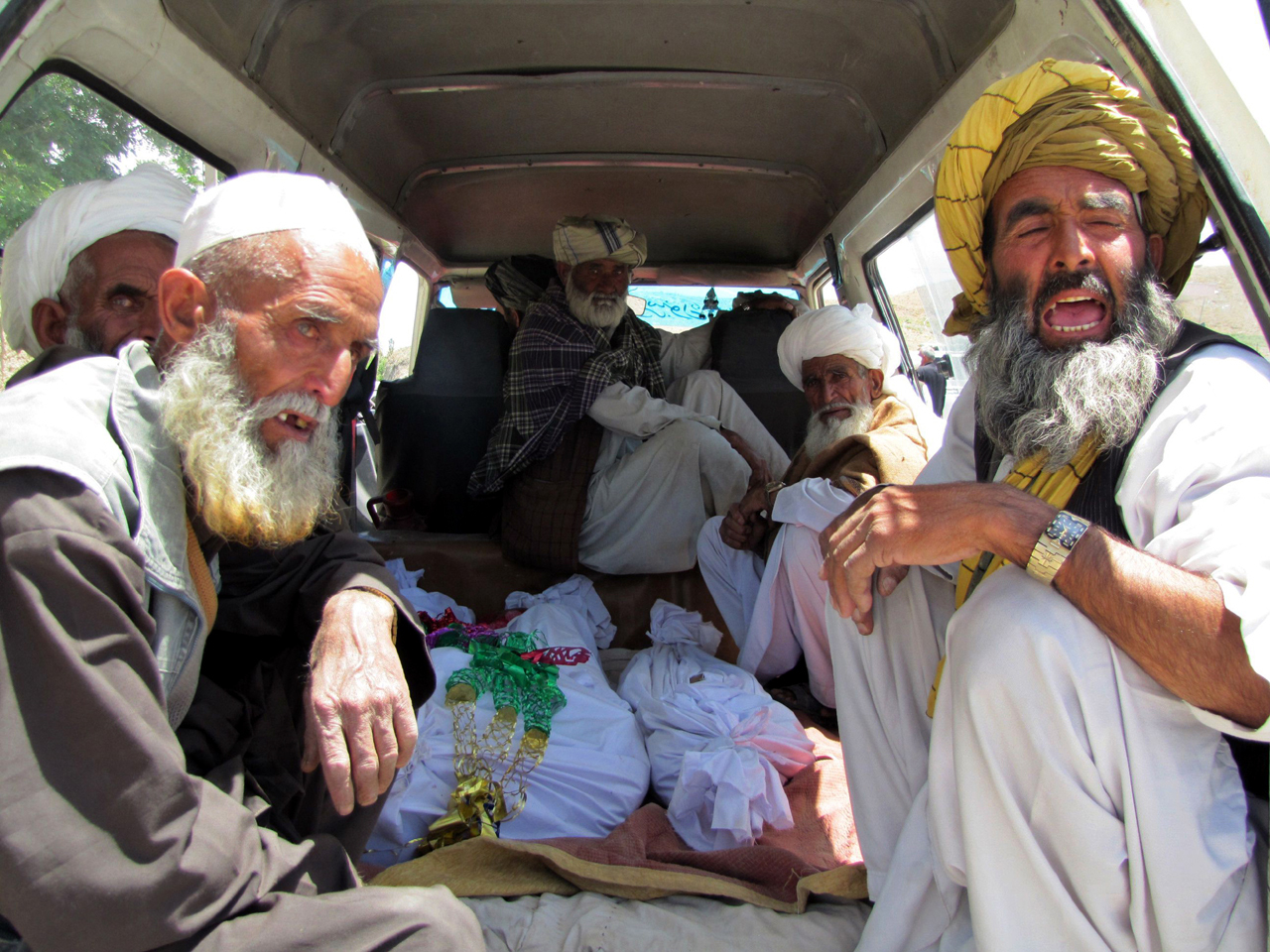 (AP) PATROL BASE PUL-I-ALAM, Afghanistan - The top commander of U.S. and NATO troops in Afghanistan offered a somber apology on Friday in an eastern province where officials say 18 civilians — half of them children — were killed in a coalition airstrike this week.

Allen said that by apologizing, the international military coalition was not yet formally claiming responsibility for the civilian deaths.

"Let's let the investigation play out," he told The Associated Press. But he added: "Our weapons killed these people."

Nighttime raids on militants taking cover in villages are a major irritant in Afghan President Hamid Karzai's relationship with the international military coalition. Karzai says the raids put civilians at risk of injury or death. Military officials say such operations are key to capturing and killing Taliban leaders.

Allen left his office in the Afghan capital in the early afternoon and boarded a Blackhawk helicopter that flew him 25 minutes south to Logar. He met first with the provincial governor, an elderly man with a long white beard and gray turban.

"I wanted to come immediately to see you after this tragedy and to offer you, personally, my apologies, my condolences and my regrets," Allen told the governor.

The two sat in overstuffed chairs in the governor's office, each cupping the other man's hands in his own.

"We take these deaths very seriously and I grieve with their families," Allen said. "I have children of my own and I feel the pain of this."

Allen and the governor then moved to a large conference room where about 35 people — relatives of the victims, members of the provincial council, Afghan army and police officials and members of parliament — listened stone-faced as Allen repeated his apology.

"I have come here today to apologize to you all for the tragedy that occurred two days ago," he began.

Governor Mohammad Tahir Sabari said the anger that boiled over in the province after the airstrike had simmered, but that the residents of Logar want the military to take punitive action against those responsible for the deaths.

"We are accepting his apology, but the people who did this — whether they were foreigners or Afghans — should be punished," the governor said. "If they are not punished, the apology means nothing and there will be no result."

Reporters were not allowed to stay for Allen's nearly hour-long meeting with the group, but Mohammad Akbar Stanekzai, a parliamentarian and a member of a delegation Karzai appointed to investigate the incident, recounted some of what took place behind closed doors.

"The faces of the people were very sad," Stanekzai said. "We told the people to stay relaxed, calm and to just talk with the general. They told him `These incidents don't just happen once, but two, three, four times and they keep happening."'

Stanekzai said the people demanded that those responsible be put on trial.

A deal signed in April was supposed to resolve the controversy surrounding night raids by putting the Afghan government in charge of such operations. Afghan troops were involved in the operation in Logar, but Karzai has put the blame squarely on the international coalition, condemning its actions and calling for it to give a fuller account of how small children were among the dead.

An Afghan doctor who examined the bodies said villagers told him that a group of Taliban fighters decided to spend the night in the house because people there were celebrating a marriage and the militants thought the wedding party would provide them cover. When NATO and Afghan troops started advancing on the house in the middle of the night, they called out for any civilians to come out, but the insurgents didn't allow them to leave, said Dr. Wali Wakil.

"The Taliban stopped them from getting out of the house," Wakil said.

Allen said the U.S.-Afghan force called in an airstrike after taking fire, presumably from inside the house, and that the troops did not know civilians were inside.

"A hand grenade was thrown. Three of our people were wounded. We called for the people who were shooting to come out, and then the situation became more grave and innocent people were killed," he said.

Last year was the deadliest on record for civilians in the Afghan war, with 3,021 killed as insurgents ratcheted up violence with suicide attacks and roadside bombs, according to the United Nations.

The number of Afghan civilians killed dropped 36 percent in the first four months of this year compared with last year — a promising trend though the U.N. emphasizes that too many civilians are being caught up in violence as insurgents fight Afghan and foreign forces.

Anti-government forces, including the Taliban and other militants, were responsible for 79 percent of civilian casualties in the first four months of this year, according to the U.N. Afghan and foreign forces were responsible for 9 percent. It was unclear who was to blame for the remaining 12 percent.