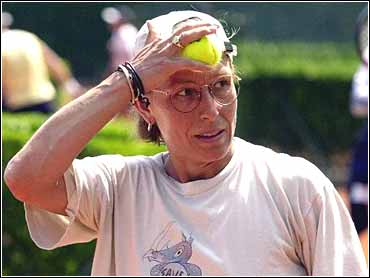 Martina Navratilova is coming back to the U.S. Open after a five-year absence.

Navratilova, who has won a record 167 singles and 165 doubles matches in her career, will play next week in the doubles at the Pilot Pen tournament in New Haven, Conn. Slovenian Katarina Srebotnik will be her partner.

Navratilova, 43, who retired from the WTA tour in November 1994, returned to play doubles at this year's Wimbledon championships. She and Mariaan De Swardt lost to Venus and Serena Williams in the quarterfinals.

Navratilova was granted a wild card entry into the Open by the USTA.