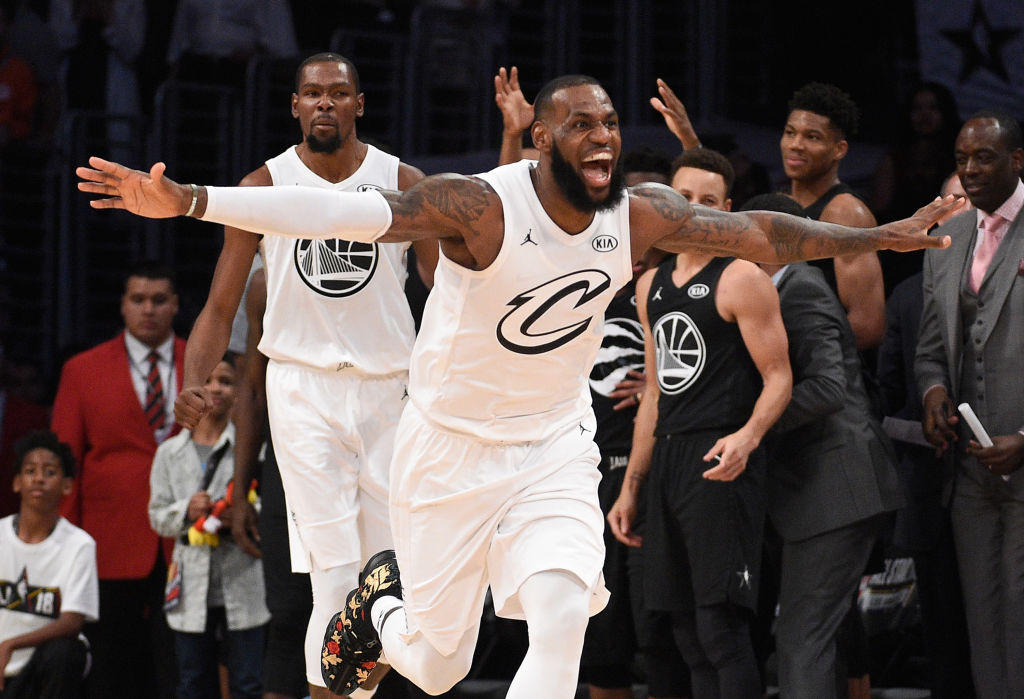 For the first time in the 67 editions of the All-Star Game, the league abandoned the traditional East-West format used since 1951 and allowed team captains James and Stephen Curry to choose their own rosters.

That twist turned a sometimes staid event into the world's richest pickup game, and the intrigue was reflected on the Staples Center court, where a real basketball game broke out.

LeBron's team even won an All-Star game with defense: On the final possession, James and Kevin Durant blanketed Curry, preventing the 3-point-shooting superstar from getting off a potential tying shot.

"I think myself and Stephen took it upon ourselves when we took on this format that we had to change the way this game was played," said James, who also had 10 rebounds and eight assists.

Both teams played defense for long stretches and contested many shots, with LeBron's group even picking up full-court late in the first half. Team LeBron also rallied from a double-digit deficit in the final minutes, tying it at 144-144 on James' 3-pointer with 1:31 to play.

LA native DeMar DeRozan hit one free throw to put Team Steph ahead, but LeBron claimed the lead with his layup after some sharp passing by his teammates. DeRozan then made a turnover on an attempted pass to Giannis Antetokounmpo, and Russell Westbrook broke out for a layup with 10.7 seconds left.

Team Steph had one last chance, but even the usually unguardable Curry couldn't find enough space to launch a 3 between his fellow captain and Durant, his Golden State teammate. Curry finished with 11 points on 4-for-14 shooting.

"We got stops when we needed to," Westbrook said.

The All-Stars' shooting percentages and final scores were way down from recent seasons, reflecting the effort on the floor. The relaxed All-Star vibe was still at Staples, however: Curry chowed down on a box of popcorn on the bench during the third quarter, and the stars made time and room for plenty of good-looking dunks and alley-oops.

Each member of the winning team made a cool $100,000, a distinct raise from previous seasons in another attempt to make things more interesting.

The All-Star draft led to interesting dynamics on court.

Curry chose his Golden State teammates Klay Thompson and Draymond Green, but the trio had to play against Durant. James also chose Oklahoma City duo Westbrook and Paul George to play along with Kyrie Irving, who forced a trade away from James in Cleveland just last summer.

Irving and James had no obvious friction, even laughing and joking on the bench. Neither did Durant and Westbrook, who broke up in 2016 when Durant left Oklahoma City for Golden State.

"It's a great and an amazing league, being able to play with so many great athletes and great players over this 14-year run and being a part of All-Star Sunday," James said. "I'll never take this moment for granted."

The All-Star Game featured no Lakers or Clippers, who share Staples Center during the regular season. But several All-Stars have Los Angeles roots, including area natives Paul George, Russell Westbrook, DeMar DeRozan, James Harden and Klay Thompson. George and James are coveted as offseason signings by Lakers fans, but there was no reprise of the "We want Paul!" chants for the Palmdale native after Saturday's All-Star practice.

The All-Stars' 3-point accuracy was hardly world-class, with Artesia High School's Harden going 2 for 13 and Leuzinger High's Westbrook going 1 for 6. Team Steph was a combined 17 for 65 beyond the arc, including 3-for-11 for Curry.

The 68th NBA All-Star Game will be in Charlotte on Feb. 17, 2019. North Carolina was scheduled to host the 2017 All-Star Game, but lost it in July 2016 because of the state legislature's Public Facilities Privacy and Security Act, which is considered by many to be discriminatory. Hornets owner Michael Jordan got a standing ovation when he appeared at center court alongside Lakers owner Jeanie Buss and Clippers owner Steve Ballmer to reveal the logo for next year's game.