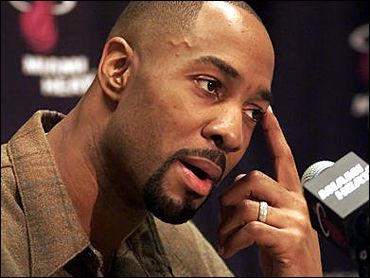 Retired NBA star Alonzo Mourning has flown to Haiti to assist relief workers in earthquake-ravaged Port-au-Prince, while he and former Miami Heat teammate Dwyane Wade are trying to recruit other pro athletes in an effort to raise funds for the recovery.

Mourning arrived in the devastated capital Friday morning on a plane with Project Medishare, a Miami-based nonprofit agency that has worked since 1995 to provide quality health care in Haiti. In a statement first released to The Associated Press, Mourning said he is confident athletes can "make a difference" for those affected by the earthquake and its aftershocks.

He and Wade are calling their venture the "Athletes Relief Fund for Haiti."

"The Haitian community has deep roots in Miami, a city which I have personally claimed as my own home for 15 years," Mourning said. "As a longtime resident, I feel a profound sense of sadness for my many affected friends and neighbors. However, I am confident we can work together to make a difference."

Mourning could not immediately be reached in Haiti, where cell phone service remains problematic. In Port-au-Prince, he told The Palm Beach Post that he was willing to do "anything they want me to do" on his visit.

"I'll do manual labor or any other kind of labor. I'm here to help them," Mourning told the newspaper.

Speaking from Houston, where the Heat were playing the Rockets on Friday night, Wade said he thought the immediate effort to enlist other NBA players to help was "going pretty good."

Numerous other athletes, leagues and organizations have also offered quick responses to the Haitian crisis since the earthquake struck on Tuesday, causing the deaths of up to 50,000 people by Red Cross estimates.

"I know so many players want to do something but don't know exactly what, so we're trying to reach out to everyone," Wade said. "The main thing we ask is for people to give, whether it's a full-game salary, a half-game salary, whatever's in your heart to give. We want to make sure all athletes get together, because there's strength in numbers."

The Heat have also announced plans to send money and supplies, asking fans to give in exchange for ticket vouchers to February games. Mourning is a vice president within the organization.

Wade and Mourning had previously held conversations about trying to help the impoverished Haitian community, which has a large base in South Florida. Wade said he was told of a text Mourning sent to his wife Tracy Wilson Mourning shortly after arriving in Port-au-Prince, saying "words can't describe how it really is if you see it in person."

Wade and Mourning have teamed up for charitable causes in the past, most notably the annual Zo's Summer Groove in Miami, which has raised more than $6 million for children's programs.