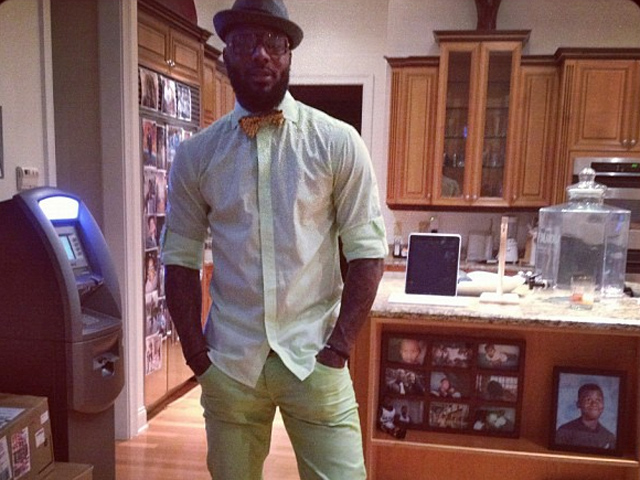 (CBS News) Here is a list of things DeShawn Stevenson has: An NBA championship ring on his finger, an Abe Lincoln tattoo on his neck, and an ATM machine in his kitchen.

That's right. The Brooklyn Nets swingman posted this photo of himself in his kitchen. The ostensible goal seems to be to show off his colorful bowtie-hat-rolled pants ensemble. But the cash dispenser behind him takes center stage.

The 6'5" guard is known for his off-the-court adventures (public intoxication) and confrontational personality (ongoing feud with LeBron James). And while Stevenson would hardly be considered an NBA star (he's averaged 7.4 points per game in his career), he has been in the league for a dozen years, making some serious cash along the way. According to USA Today, he had earned over $26 million in salary as of 2010, so it's perhaps no surprise the guy has an ATM across from his toaster.

The only question is does his ATM dispense five-dollar bills to honor his Lincoln tattoo - or does it charge a $5 transaction fee instead?