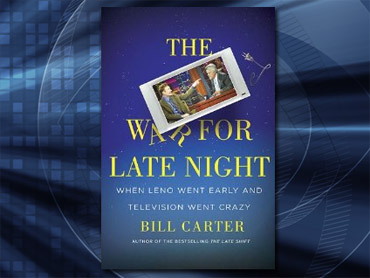 It was a war for "The Tonight Show" and late night TV supremacy that played out in public -- the likes of which hadn't been seen before.

After only seven months at the helm, NBC took Conan O'Brien off "The Tonight Show" to make way for the return of Jay Leno, whom he'd replaced, and whose own grand experiment of a weeknight 10 o'clock show had failed miserably.

The dramatic story is told in "The War for Late Night: When Leno Went Early and Television Went Crazy," by the chief television reporter for the New York Times, Bill Carter.

He told "The Early Show on Saturday Morning" co-anchor he had a strong hunch such a war could develop early-on. "When this started," Carter said, "when they gave Jay the 10:00 show and they didn't let him go, I thought, 'This is gonna get interesting; you know, I think something's going to blow up here."'

It all traces back to when NBC told Leno five years ahead of time that it would bring O'Brien in to replace him on "Tonight."

But when the time came, Leno was still No. 1 in his time slot.

"That was the problem," Carter said. " ... Jay went along with it, but he was very unhappy, extremely unhappy. He didn't think it was right that he (was being) fired, is the way he thought of it. But also, five years in television is so crazy to think that you can predict what's gonna happen. I think they thought Jay would be fading in five years and he wasn't. So then, they had a dilemma: 'Do we leave Conan where he is and let Jay go to AVC, where he might beat him?' It was a very complicated situation they created."

Asked by co-anchor Rebecca Jarvis if NBC feels it made a mistake and would do things differently if given the chance, Carter responded, "Jay's numbers are down in the demo (demographic group advertisers covet) - (but) he's got more viewers than Conan had, and he's still No. 1 - he's barely beating Letterman. NBC keeps saying, 'We just want the guy to be No. 1.' I don't know if they go back and re-do the whole thing. I think they might say, 'We should never have taken Jay off.' Because putting Jay at 10:00 sort of damaged him in some ways. They're never gonna admit, unless Conan goes on to become huge again, that they made a mistake, because they don't do that in television."

O'Brien, Cater notes, was "really hurt" when he got the "Tonight" boot from NBC. "He made a lot of money," Carter says, "but, boy, psychologically, it was tough for him. But I do think he's a smart guy, Conan, really, really smart guy, and he's gonna figure it out."

Carter says he "loved" O'Brien's first show in his latest go-round, on cable channel TBS. "I thought he started with a great opening," Carter observed, "which he's done each time he's been on TV, and I think he's got all the energy in the world, which I like. I think he's freer than he was when he was on 'The Tonight Show.' I think he's got to go past this and move on to something new. He's got to be in some way reinvented. He can't just re-create himself. He's got to be something different, I think."