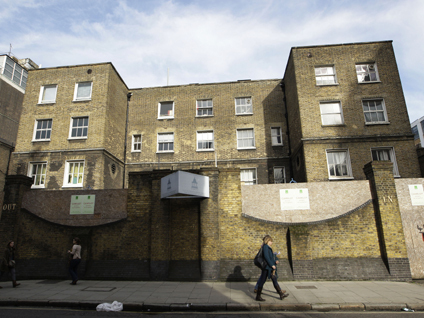 LONDON - It's a battered brick building behind a high wall in London — austere, overlooked and slated for demolition.

Look closer, and it's linked to one of Britain's greatest authors as well as to a shameful period in the nation's social history.

Two centuries ago this neglected London edifice was a workhouse, where the city's destitute labored for rations of gruel. Their plight inspired social reformers — including a neighbor, Charles Dickens, who likely used the building as inspiration for his novel "Oliver Twist."

Advocates hope the newly discovered link to the novelist will help them win their uphill battle to save the building from developers who plan to tear it down and build new apartments and a local lawmaker who has branded it an ugly relic of an inhuman institution.

"We wouldn't think of demolishing Georgian stately homes, squares and terraces where the upper class lived," said Nick Black, a historian who is one of the academics and local residents battling to save the structure. "It's also important that we keep some vestiges of the 18th-century world of the impoverished and the poor."

The former workhouse in the Fitzrovia neighborhood — most recently part of a hospital that closed in 2005 — is one of hundreds of run-down Georgian and Victorian buildings that Londoners pass without a second glance.

Built in the 1770s atop a paupers' burial ground, it once was home to 500 unfortunate citizens who could not afford to feed themselves and had to rely upon the meager charity of the state. Under a stone carving exhorting them to "avoid idleness and intemperance," they worked at menial tasks, ate watery gruel and were allotted living space half the size of that given to prisoners in jail.

It's a setting known to millions from "Oliver Twist," in which the workhouse hero Oliver, "desperate with hunger, and reckless with misery" tremblingly holds out his bowl and says "Please, sir, I want some more." The book, published in 1838 when Dickens was 26, helped awaken affluent Britons to the horrors of the workhouse.

Those pressing to save the building have taken heart from new research revealing that Dickens, whose own childhood was scarred by poverty and instability, lived just nine doors away between the ages of three and five and again between 17 and 20, when he was staring his career as a journalist and a writer. The link had been overlooked because the street has since changed names.

"We has suspected there was probably a Dickens connection, but we had no proof," said Aimery de Malet, another campaigner. "It was the final thing that really tied everything together."

Experts say the case is circumstantial — Dickens never revealed his inspiration for the workhouse in "Oliver Twist" — but compelling.

"I think it's inconceivable that it wasn't that workhouse, because he lived so close to it," Dickens scholar Paul Schlicke told BBC radio. "He would have been seeing it, hearing it. Seeing the paupers coming in, the beadle (supervisor) walking by."

The building is one of only three surviving Georgian workhouses in London, and has close ties to the Victorian social reformer Joseph Rogers, the workhouse's medical officer, who fought for improvements including separate infirmaries for the workhouse's many sick residents.

Despite that pedigree, in 2007 the government rejected a bid to give the building protected status, rejecting the advice of culture watchdog English Heritage.

Developers planned to tear it down for redevelopment, but plans stalled after the 2008 credit crunch. It's an irony that a building once filled with the victims of one financial crisis may have been saved by another.

Britain's new Conservative-led government has agreed to take a second look and says it will make a decision by early March.

Campaigners are cautiously optimistic that the Dickens link will sway the government. The Department for Culture, Media and Sport will not divulge how it plans to rule, but says it "nearly always" follows the advice of English Heritage, which recently submitted a second glowing recommendation.

De Malet says campaigners don't want the building turned into a museum, simply "a sensitive redevelopment" that preserves its architecture and heritage.

"We would be happy if there was a single glass box commemorating what was there in the past," he said.

Not everyone is a fan of the old workhouse. For some, the building is too plain and its associations too grim.

Local lawmaker Frank Dobson wrote to Heritage Minister John Penrose, arguing that the "alienating and inhuman" edifice was not worth preserving.

Black says those who make such arguments risk ignoring history.

"Presumably they would also advocate the demolition of the Tower of London," he said. "It has a very grisly history and unpleasant things went on.

"There's lots of British history we're not terribly proud of, but the answer is not to destroy it and pretend it never happened."