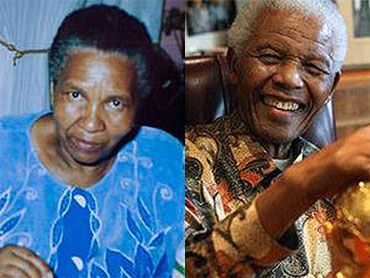 Mpho Pule died in September 2009, just one month before Nelson Mandela's foundation admitted that she was, quite possibly, the iconic South African leader's lovechild.

According to an exclusive report in the Mail and Guardian on Friday, Pule spent years trying to get verification of her grandmother's claim that she was Mandela's daughter.

The woman, who died at the age of 63 and did bare a striking resemblance to Mandela (side-by-side photo at left), spent most of her life uncertain of her father's identity. That's how her mother wanted it, according to the newspaper, before she died and took the secret to her grave years earlier.

In 1998, Pule's grandmother dropped the bombshell, telling her Mandela had a brief affair with her mother in 1945 in Cape Town.

The Mail and Guardian's information comes from Martin McKenzie, a school teacher and family friend enlisted by Pule to help press Mandela's family and organization for the truth, and a meeting.

McKenzie told the paper he sent at least 15 letters to the Nelson Mandela Foundation seeking a meeting and corroboration of Pule's grandmother's account.

Every correspondence sent to McKenzie from the foundation reminded him not to go to the media with his story, according to the newspaper. Concerned about the harm the news might do to Mandela, who is 92 years old, McKenzie said he kept the paternity claim to himself.

But then, in 2009, he got a letter from the foundation saying, "all the information provided by you has been verified." After a meeting with the Pule's family, he decided to go public.

Verne Harris of the Nelson Mandela Foundation told the Mail and Guardian that Pule's story passed the first two hurdles used to test the barrage of paternity claims made against the elder statesman -- whether Mr. Mandela was imprisoned at the time of the alleged conception, and a check of historical records to corroborate the timing involved.

"In this case, unlike nine times out of 10, both hoops were cleared, and this is the point at which we hand the matter over to the family," Harris told the newspaper.

Despite continued pressure from Pule's family, and requests for verification by the Mail and Guardian, the Mandelas have yet to get in touch.

CBS News' Sarah Carter says there has been only one other credible paternity claim made against Mr. Mandela -- a son he's alleged to have had with former colleague Ruth Mompati. That story is told in the recently published book, "Young Mandela," by David James Smith.