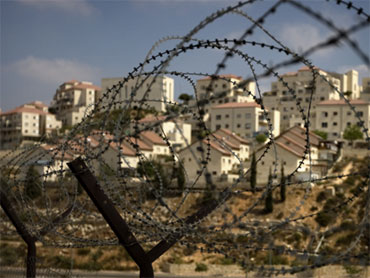 The optimist in me says, let's turn the page and hope for the best. The pessimist in me, weary of the same script year after year, wonders whether the U.S. will ever get the upper hand in an increasingly dysfunctional relationship.

Israel says this is all the prelude to a construction freeze - not including the current batch of apartments, naturally. Now, the Israelis say, it will be up to the Arabs to reciprocate with a demonstration of their own good will. Fat chance. As the Israeli newspaper Haaretz notes, "the number of new housing units will not actually decline compared to previous years. The only difference is that now, that instead of construction permits being given gradually throughout the year, the government intends to issue hundreds of permits within a few days, before the official announcement of the "freeze" is made."

(The Jerusalem Post quoted an unnamed senior political official saying that Israel will abide to a six month construction moratorium "with an extension dependent on whether the Palestinian Authority and neighboring Arab countries step up to the plate and deliver what is expected of them.")

Netanyahu's advisors make the argument that this was just a sop to the settlers and not much of one anyway as no new construction is going on deep inside the West Bank. Will that mean much to the Arabs who complain that more Jewish settlement means less land for any future Palestinian state? Chief Palestinian negotiator Saeb Erekat gave voice to that frustration, telling the Washington Post that "Given the choice between making peace and making settlements, they have chosen to make settlements.

It's also obviously irritating the White House. On Friday, the president's spokesman, Robert Gibbs, said Israel's plans were "inconsistent" with commitments the Jewish state has made earlier and "we urge that it stop."

You have to wonder about the timing of the decision. Israel finally has someone it can talk with on the Palestinian side. Unlike the inflammatory Ahmad Shukairy or the double-dealing Yasser Arafat, Netanyahu's would-be interlocutors feature a couple of pragmatic politicians in the person of Mahmoud Abbas and Salam Fayed. These guys aren't pan-Arab revolutionaries or religious fanatics. Just the opposite, in fact. They're a couple of bourgeois technocrats who appear eager to work out a deal on a two-state solution. But they're already playing with a weak hand and each time Israel builds a new apartment (or settlement) in the West Bank, Fatah loses another vote to Hamas.

In 2003, George Bush made clear to Israel that it couldn't put the settlement question off indefinitely. "Israel must make sure there is a contiguous territory that the Palestinians can call home," he said. When George Mitchell, the U.S. Mideast envoy, arrives in the region for more talks with Israel in the coming week, he'll bring the exact same message.