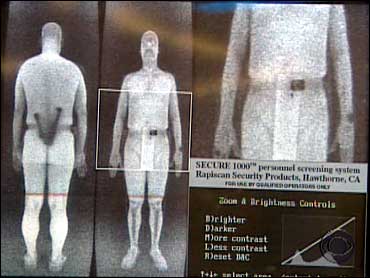 With the holiday travel season fast approaching, recent stepped-up security screening at the nation's airports has provoked an outcry from passengers and airline pilots alike, with some of the latter group even threatening to boycott intrusive new checks during the Thanksgiving rush.

CBS News travel editor Peter Greenberg says, regardless of how many airline pilots chose not to pass through security to go to work, the additional security measures are likely to cause longer lines and delays as Americans head off to see their loved ones this holiday season.

The new measures include a new type of walk-through scanning machine which uses very low doses of x-rays to scan travelers' front and back, creating what many have called a "naked" image.

In addition, Transportation Security Agency agents are now allowed to conduct a very detailed, very personal, body search of passengers who refuse to pass through the new scanners. The agents are allowed to use fingers and the palms of their hands to feel around breasts and genitalia.

A growing number of people, including the 11,500-member Allied Pilots Association, brand these new searches humiliating. The pilots' union has dubbed the new measures a "virtual strip search" and a "grope."

The new personal searches, which the TSA calls "enhanced patdowns," came into effect in late October.

The concerns over privacy, coupled with fears over the long-term exposure to low-level radiation, have the APA, the largest independent union of pilots in the world, calling for its members to boycott the scanning machines.

Greenberg says the government's official plan was to replace all the old airport magnetometers (the metal detection machines airline passengers must walk through as part of the security protocol) with electronic body scanners at all 2,200 security checkpoints in all 450 commercial airports in the U.S.

In a preview of the new scanners' arrival at U.S. airports, acting TSA Administrator Gale Rossides told CBS News correspondent Bob Orr the x-ray images created by the new scanners are never kept on a database.

"These images cannot be stored," Rossides told CBS. "An officer cannot print off the image. So as soon as that analysis is made of that image, that image is destroyed."

Aside from the worries over privacy and safety, Greenberg says the new scanners and patdowns will inevitably lead to longer waits for holiday travelers this year.

Waiting during peak times at TSA checkpoints averaged 12 minutes in 2006. By 2008, the average wait had grown to 15 minutes. The new procedures threaten to increase those waiting times further, says Greenberg, not just because of the time it takes to go through the scanner, but because if any passenger "opts out" of going through the machine, they will then be subjected to a the much more invasive, and time consuming, physical "enhanced patdown" by TSA agents.

With the new machines, "you need to take absolutely everything out of your pockets... everything. Not just metal, but paper, money, everything, and then wait to be screened by the machine, and then wait for another TSA person looking at the images in another room to clear you," says Greenberg. This can take up to five minutes per passenger. That's assuming nobody opts for the patdown.

"If more than one passenger at a time opts out, then the delays can become exponential," predicts the travel editor.

Greenberg's recommendations if you're headed to an airport this holiday season: Show up at the airport with nothingin your pockets. The machines are not at all airports, so pick an airport (if you can) that doesn't yet have them. At the airports that do have the new machines, they have not totally replaced the old magnetometers. You will frequently see security checkpoints that have both machines in place - so whenever you can, pick the old magnetometer, even if the line seems longer.