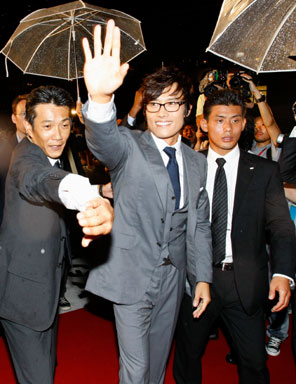 Modifications to an experimental vaccine for Alzheimer's disease that was discontinued because of side effects might make it safe, a study suggests.

Researchers in Canada and Germany found that a more refined form of the vaccine worked in mice, which raised the chance that it might not produce in humans the inflammation that ended clinical trials.

That remains only a possibility and requires more research, said JoAnne McLaurin of the Centre for Research in Neurodegenerative Diseases at the University of Toronto. She is the first author of the study being published Tuesday in the online edition of the journal Nature Medicine.

In January, the Irish drug company Elan Corp. suspended a 360-patient experiment with the vaccine after 15 patients suffered serious brain inflammation. Elan announced in March it was abandoning the vaccine, although the company said it plans to continue exploring ways to slow the worsening of Alzheimer's.

Dave Morgan, an Alzheimer's researcher at the University of South Florida, said other groups also have worked on ways to refine the vaccine.

The problem, Morgan said, is that it is not clear why the patients in the now-halted trial developed brain inflammation - whether immune cells entered the brain to attack the vaccine, or the vaccine provoked a reaction in the brain itself.

"Before we put any more vaccines in people, we need to know what the problem was," said Morgan, who is not part of the Toronto research team.

The vaccine is meant to clear away tangles of amyloid-beta protein, called plaques, that accumulate in the brains of Alzheimer's victims.

In earlier tests on mice, the vaccine produced antibodies directed against the AB proteins that cleared the plaques and reversed symptoms of brain degeneration.

McLaurin, who is not connected to the Elan research, explained that her experiments in mice were aimed at finding out what the active antibody is and how it works.

She and her fellow researchers found they could produce antibodies against AB protein in mice using a vaccine that included only a small portion of AB rather than the entire molecule.

That raises the possibility that a vaccine using only a portion of AB would be less likely to cause the inflammation seen in the earlier trial. McLaurin said it also might lead to development of a small molecule that mimics the vaccine, which could sidestep potential problems of the tested vaccine.

The response to the vaccine seems to target a specific group of AB in the body, known as protofibrillar precursor, according to the study.

While protofibrillar is not abundant, it is a critical component in the formation of the plaque that causes the brain disorders in Alzheimer's, McLaurin's team reported.

In a separate paper in the same issue, researchers headed by Roger Nitsch of the University of Zurich, Switzerland, reported that the human patients in the Elan trial did accumulate antibodies against AB.

They said the antibodies recognized AB in tangles, diffuse AB deposits and AB in blood vessels of the brain and were able to cross the blood-brain barrier, which suggests they might have the capacity to directly destroy plaques in the brain.

The antibodies did not, however, attack the longer form of AB that occurs in the nerve cells of healthy people as well as Alzheimer's patients.

The function of that type of AB is unknown, but healthy nerve cells can contain a lot of it. This selectivity is good news, because an attack on the longer form of AB could potentially result in complications.