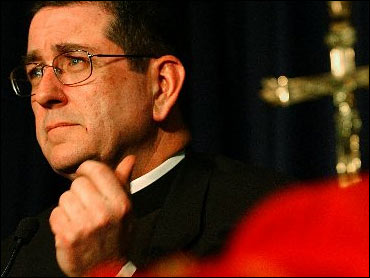 The interim leader of the Boston Archdiocese said Wednesday that he backs efforts to settle hundreds of lawsuits accusing church leaders of turning a blind eye to claims that priests molested children.

Roman Catholic Bishop Richard Lennon said he told the church's lawyers to set aside all day-to-day activities — except those mandated by the courts — so they can "actively pursue" settlement of the cases.

"I will support efforts to arrive at a settlement of claims which will be fair and equitable for all the victims of sexual abuse," Lennon said at his first news conference since being named apostolic administrator last week after Cardinal Bernard Law resigned as archbishop.

"I will also begin to meet with victim survivors who wish a meeting with me respectfully listening to them. I hope to learn and appreciate the depth of their suffering," he added. "I will in turn extend to each of them my apology on behalf of the church for the abuse which they have suffered."

More than 400 lawsuits are pending against the archdiocese, and the prospect of paying the claims has prompted the archdiocese to consider filing for bankruptcy.

Wednesday, Lennon said that was still an option.

"The bankruptcy option is still on the table being discussed in the Archdiocese, along with a mediated settlement," he said.

An order by a state judge overseeing the lawsuits has led to the release of a flood of internal personnel records that have shed light on the archdiocese's handling of allegations against priests, including the moving of accused priests from parish to parish.

The latest records, released Tuesday, detail how one priest was allowed to say weekly Mass even after he had been accused of molesting boys while they slept. Another was transferred from parish to parish even though a colleague complained he was "sick and needs help."

The documents detail several allegations, including those made against the Rev. Joseph K. Coleman, who was accused molesting a 14-year-old boy in 1987.

When confronted by church officials, Coleman acknowledged that while drinking heavily, he had touched the sleeping boy on two occasions and once performed a sexual act. Coleman also acknowledged performing sexual acts twice on a sleeping 15-year-old boy.

"He admits to a strong attraction in this area of sexuality and has touched other young boys in the genitals by way of a quick brush or touch. Again, it was done while they were sleeping," a 1987 internal church memo reads.

Church officials sent Coleman to a psychiatric facility. Over the next six years, Coleman was not allowed to return to parish work, but he was given a position as chaplain at two Catholic hospitals and was allowed to say weekly Masses.

"The board suggests he consider placing an apology in his file for any victim who might come forward in the future," reads a 1993 summary.

Coleman told the Boston Herald he was not in full control of himself at the time of the allegations because he had a drinking problem.

"I've been dealing with this for years, but I can't imagine how difficult it is for the victims to deal with it for years, especially without the assistance of professional help," he said.

Attorneys Roderick MacLeish Jr. and Jeffrey Newman, who represent more than 200 of the alleged abuse victims, said in a letter to archdiocese lawyers that they had not found anything in their review of more than 10,000 documents that suggests Lennon played a role in placing known molesters back into parish ministry.

In fact, the lawyers said, church documents show that Lennon was involved in the process of defrocking at least three priests who were accused of sexually abusing children.

However, Wednesday, he said he has not thought about the Boston church abuse scandal in terms of homosexuality, nor considered what steps the Vatican might take regarding openly gay priests.