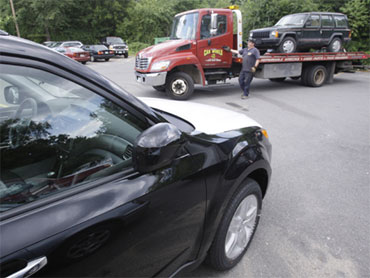 The nation's car dealers have a new worry: they're running out of vehicles.

As the "cash-for-clunkers" program reaches its next chapter, and consumers pour into showrooms, some dealers say their stock of new cars - especially for fuel-efficient smaller models - is waning.

At Larry Miller Honda in Boise, Idaho, about two-thirds of the car lot is empty. The dealership is nearly out of 2009 models - something that usually doesn't happen until the late fall.

And the situation is so dire at a Chrysler, Dodge and Jeep dealership in Beaver Springs, Pa., that the owner, Michael Andretta, is essentially shutting down this weekend to repave his car lot.

"I'm out of cars," Andretta said. "I do not have a single car in my dealership that qualifies for anything."

Such a scenario amounts to a complete shift from earlier in the year, when hard-hit dealers saw cars pile up as consumers largely shunned big-ticket purchases.

It also reflects the rampant popularity of the incentive program, which gives car owners vouchers of up to $4,500 to trade in older, gas-guzzling vehicles for new, cleaner varieties.

On Friday, President Barack Obama approved another $2 billion to extend the program until Labor Day, putting consumers back in the car-buying mood. The program's first $1 billion ran out in about a week.

However, industry officials say shoppers now searching for deals may need to be more flexible, given the dwindling number of cars on many lots. Customers hoping for a blue vehicle, for instance, may need to settle for a white one instead, said John McEleney, the chairman of the National Automobile Dealers Association.

"People are having to maybe make a second or third choice," he said.

The association's chief economist, Paul Taylor, said in a statement Friday that "the overall inventory of passenger cars and light trucks can support another month of robust new vehicle sales" as automakers ramp up production.

Still, even as car lots thin, some wonder whether the new infusion of government cash into the clunkers program is actually weakening consumers' resolve to go out and make a deal.

During the first phase of the program, which began last month, consumers flocked into dealerships, worried that they'd miss out otherwise as the money ran out. Now, shoppers may not feel as pressured.

At Crown Ford in Lynbrook, N.Y., sales manager Anthony Ciuffo said Saturday that walk-in traffic had slowed down at his dealership, although phone calls remained steady.

"It seemed that there was more sense of urgency prior to passing the bill," he said. "People feel that they have a longer window of opportunity."

Ciuffo said sales had been brisk earlier in the week, and that his dealership had sold out of the Focus sedan and mid-size Escape SUV - two of Ford's most popular cash-for-clunkers vehicles. Like many dealers interviewed, Ciuffo said additional cars should arrive in about a week to 10 days.

But John Rogin, who owns a Buick dealership in Livonia, Mich., said he wasn't expecting the same frenzied pace that he witnessed earlier, since many of those who could afford a new car already jumped at the chance to do so when the program debuted.

"This is really going to slow up," he said. "It's not going to accelerate from here."

What's more, he said he's beginning to notice a changing consumer sentiment. The early excitement that came with the program is slowly morphing into bitterness among consumers discovering that their vehicles don't qualify for vouchers, he said.

To be eligible, vehicles must have a combined city/highway mileage of 18 miles per gallon or less when they were new.

But, he said, those ineligible are now wondering: "What about me?"

To be sure, dealers say they are happy with the program and thrilled with the increase in business.

Paul R. Smith, general manager of a Chevy dealership in East Hartford, Conn., said the number of prospective buyers has doubled - to between 20 and 25 per day from 10 - in his showroom where car roofs sport signs that read, "If your car qualifies, this car qualifies."

The Chevy dealership, on a strip occupied by several others, has sold 25 cars in the cash-for-clunkers program so far. Still, Smith worries about how many cars he'll have left until 2010 models arrive in November.