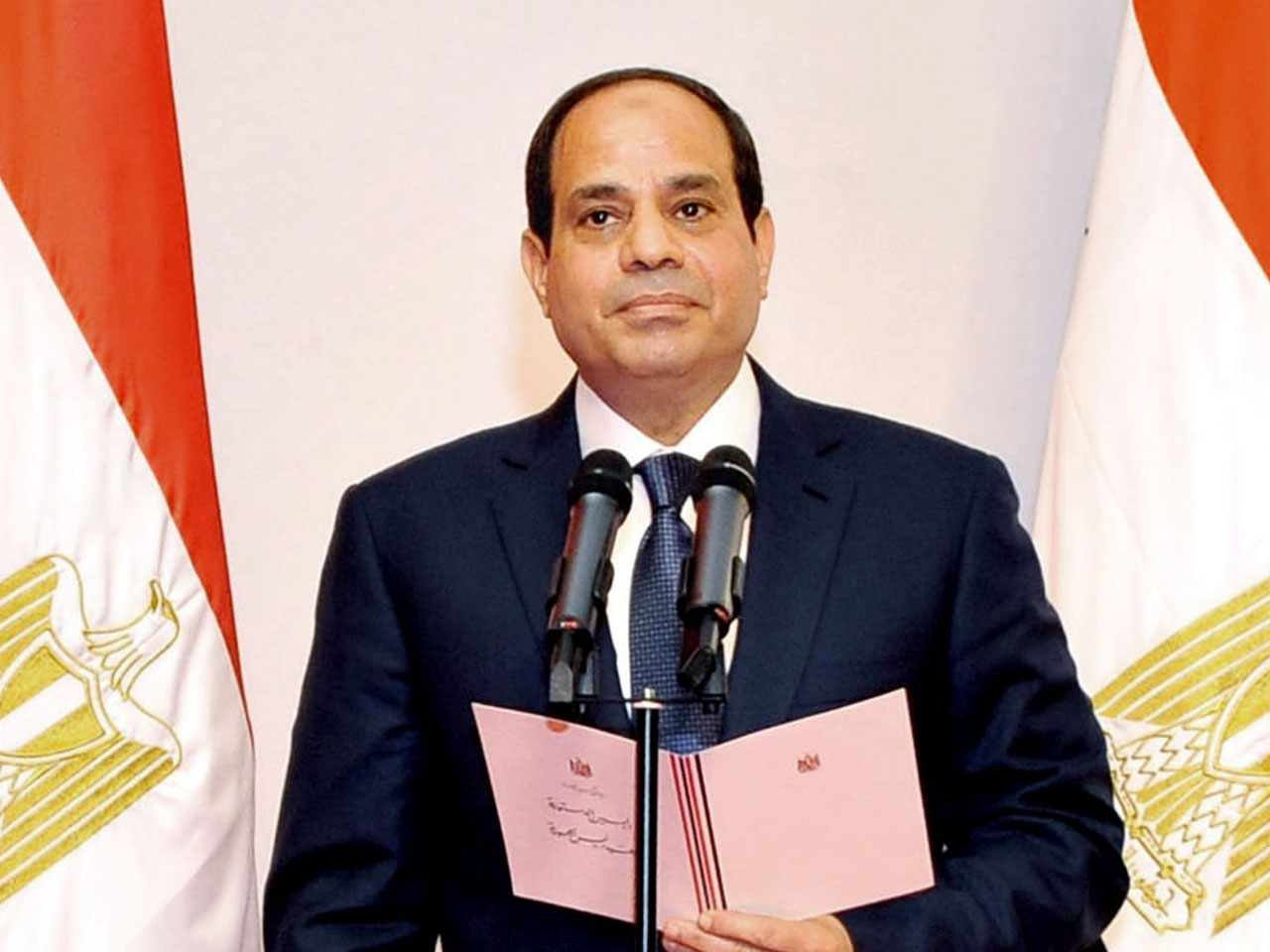 CAIRO - Egypt's newly sworn-in president called on his country Sunday to build a more stable future after years of turmoil and revolt, asking them to work hard so that their rights and freedoms could grow.

Retired Field Marshal Abdel-Fattah el-Sissi, the former military chief who ousted Egypt's first freely elected leader last July, addressed a ceremony held at a presidential palace in Cairo hours after he was sworn in by the Supreme Constitutional Court.

El-Sissi, who toppled Islamist President Mohammed Morsi, is Egypt's eighth president since the overthrow of the monarchy in 1953, the year after a military coup. With the exception of Morsi and two civilians who served in an interim capacity, all of Egypt's presidents have come from its armed forces.

A 21-gun salute greeted el-Sissi as he arrived at the presidential palace in Cairo's upscale district of Heliopolis after being sworn in. El-Sissi also reviewed a military honor guard.

He welcomed dozens of local and foreign dignitaries, including the kings of Jordan and Bahrain, the emir of Kuwait and the crown princes of Saudi Arabia and Abu Dhabi, in the United Arab Emirates.

The five Arab nations backed el-Sissi's ouster of Morsi. Saudi Arabia, Kuwait and the Emirates since have provided billions of dollars to shore up Egypt's ailing finances.

El-Sissi, addressing his guests at the Ittahadiya palace, called for unity and an end to three years of turmoil since the ouster of autocrat Hosni Mubarak in 2011.

"It is time for us to build a future that is more stable and pen a new reality for the future of this nation," he said. He said hard work, something that he has repeatedly called for in recent weeks, will allow Egyptians to "pay attention to rights and freedoms (to) deepen and develop them."

"Let us differ for the sake of our nation and not over it; let us do that as part of a unifying national march in which every party listens to the other objectively and without ulterior motives," he said.

"Egypt, both the state and the people, would like to offer you thanks for the glorious services you offered them," he told Mansour.

Both men later signed the "handover of power document" in the presence of dozens of local and foreign dignitaries.

El-Sissi won a landslide victory in presidential elections held last month, receiving nearly 97 percent of the vote, with a turnout of 47.45 percent.

The three-day election was declared free of fraud but was tainted by the extraordinary means authorities used to get the vote out, including a threat to fine those who stayed home, a one-day voting extension, and allowing free rides on trains and buses to encourage voters to travel to their home districts to cast their ballots.

For international monitoring groups that observed the election, the vote was hardly ideal. U.S.-based Democracy International and the European Union's Election Observation Mission both released preliminary reports that criticized the current political climate and how it affected the outcome of the election, reports CBS News' Alex Ortiz.

"Our feeling is that ... suppression of dissent and lack of respect for basic freedoms, including freedom of speech and freedom of association, have severely compromised the political environment," Bjornlund said in a briefing with reporters.

The European Union monitors were far more restrained in their criticism but still pointed to major structural problems they say affected the outcome of the vote.

The election also was held against a backdrop of vastly curbed freedoms in the 11 months since Morsi's ouster and a massive crackdown on supporters of his Muslim Brotherhood, hundreds of whom have been killed in clashes with security forces. Morsi's supporters boycotted the vote.

The pro-military media meanwhile has demonized not only the Brotherhood but also secular icons from the 2011 uprising.