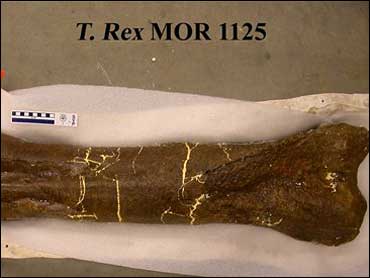 Researchers have decoded genetic material from a 68-million-year-old Tyrannosaurus rex, an unprecedented step once thought impossible.

"The door just opens up to a whole avenue of research that involves anything extinct," said Matthew T. Carrano, curator of dinosaurs at the Smithsonian's National Museum of Natural History.

The new finding adds weight to the idea that today's birds are descendants of dinosaurs.

While dinosaur bones have long been studied, "it's always been assumed that preservation does not extend to the cellular or molecular level," said Mary Higby Schweitzer of North Carolina State University.

It had been thought that some proteins could last a million years or more, but not to the age of the dinosaurs, she said.

So, when she was able to recover soft tissue from a T. rex bone found in Montana in 2003 she was surprised, Schweitzer said.

Researchers led by John M. Asara of Beth Israel Deaconess Medical Center in Boston now have been able to analyze proteins from that bone.

What Asara's team found was collagen, a type of fibrous connective tissue that is a major component of bone. The closest match in creatures alive today was collagen from chicken bones.

Schweitzer and Asara report their findings in Friday's issue of the journal Science.

"Most people believe that birds evolved from dinosaurs, but that's all based on the architecture of the bones," said Asara. "This allows you to get the chance to say, 'Wait, they really are related because their sequences are related.' We didn't get enough sequences to definitively say that, but what sequences we got support that idea."

"The fact that we are getting proteins is very, very exciting," said John Horner of Montana State University and the Museum of the Rockies.
It "changes the idea that birds and dinosaurs are related from a hypothesis to a theory," he added.

To scientists that's a big deal.

In science, a hypothesis is an idea about something that seems probable, while a theory has been tested and is supported by evidence. Previously, the bird-dinosaur relationship was based on similarities in the shape of bones, now there is solid evidence of a relationship at the molecular level.

Horner, who found the bones studied by Schweitzer and Asara, said this is going to change the way paleontologists go about collecting specimens — they will now be looking for the best preserved items, often buried in sand or sandstone sediments.

This summer, he said, his museum is organizing nine different field crews involving more than 100 people to search for fossils in Montana and Mongolia.

Asara explained that he was working on a very refined form of mass spectrometry to help detect peptides — fragments of proteins — in tumors as part of cancer research.

In refining the technique, he had previously studied proteins from a mastodon, and when he heard of Schweitzer's finding soft tissues in a T. rex bone he decided to see if he could detect proteins there also.

He was able to identify seven different dinosaur proteins from the bone and compared them with proteins from living species. Three matched chickens, two matched several species including chickens, one matched a protein from a newt and the other from a frog.

Co-author Lewis Cantley of Harvard Medical School noted that this work is in its infancy, and when it is improved he expects to be able to isolate more proteins and seek more matches.

"Knowing how evolution occurred and how species evolved is a central question," Cantley said.

The Smithsonian's Carrano, who was not part of the research teams, said the report is an important confirmation of Schweitzer's techniques and shows that "the possibility of preservation is more than we had expected, and we can expect to see more in the future."

Matt Lamanna, a curator at the Carnegie Museum of Natural History in Pittsburgh, called the finding "another piece in the puzzle that shows beyond the shadow of a doubt that dinosaurs are related to birds." Lamanna was not part of the research team.

So, does all this mean that a T. rex would have tasted like chicken? The researchers admit, they don't know.

Both research teams were supported by the National Science Foundation and the David and Lucille Packard Foundation. Schweitzer had additional support from NASA and Asara had added support from the Paul F. Glenn Foundation.