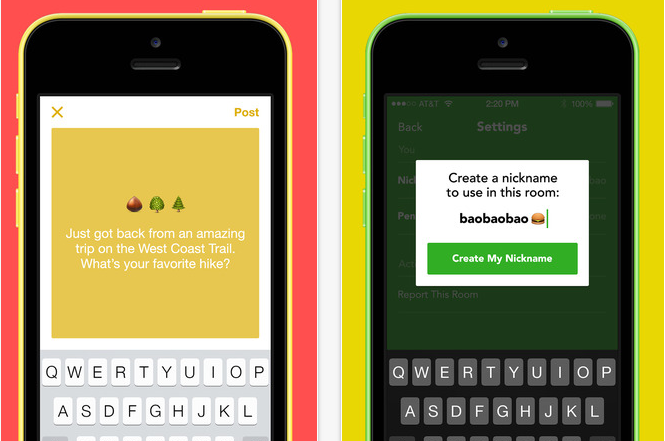 Facebook's sheer existence is based on getting people to share everything -- their names, their faces, who their friends are, where they are right now. But Rooms, a new app the company released Friday for iPhone and iPad, is designed for just the opposite: to let people connect without even having to introduce themselves.

Rooms recalls the forums, message boards and chat rooms of the earliest internet discussion groups. Users can create "rooms" based on a particular theme or interest -- hiking, say, or Korean cooking. Rooms are virtual meeting places where any other users can congregate to discuss the room's topic. What makes them so different from talking about something on Facebook is that you adopt a handle, or nickname, as the app refers to it, every time you enter a room. Whether that is your real name or a clever alias is up to you.

The app does not load your identity or connect to your contacts. There is no "sign in with Facebook" option.

The app is set up as a feed of rooms. The constant stream of photos, videos and text looks much like what you see as you scroll through Instagram. Users can customize their rooms' wallpaper colors and choose an icon and phrase to represent a unique version of a "like."

Users can choose to make their rooms public or by-invitation-only. Invites come in the unusual form of QR code on a colored background that can be shared via email, text message, over social media or printed out on a sheet of paper. (Printouts: Another blast from the past.)

In order for an invitee to enter a room, he must either take a screenshot of the invite on his phone or snap a photo of it with the phone's camera.

Facebook is "working closely with a small set of community builders," to create the first round of rooms, according to the Rooms blog. This will keep growth relatively slow, and makes invitations a necessity for new users.

For now, the free app is only available for iOS devices.