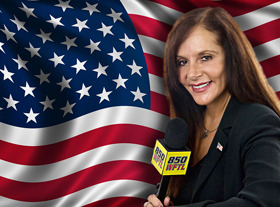 Allen West, the Tea Party-backed Republican elected to Congress from Florida, has tapped Joyce Kaufman to be his chief of staff.

Kaufman is known to conservatives in South Florida for her afternoon radio show, which she appears poised to continue while in Washington (despite potential problems with the arrangement).

On her show Tuesday, as The Hill reports, Kaufman unloaded on House Speaker Nancy Pelosi, casting her as "garbage."

"Over these months I have been blessed to form very wonderful relationships with the West family," she said. "I looked at this family and [told] myself, 'How do you not fight and put them up on the pedestal when we've got this garbage up on the pedestal now, people like Nancy Pelosi?'"

It's reportedly not the only controversial comment by Kaufman: According to the Miami New Times, she said of illegal immigrants in 2007 that "If you commit a crime while you're here, we should hang you and send your body back to where you came from, and your family should pay for it."

West, with Tim Scott, is one of two African-American Republicans elected to Congressthis year.

Kaufman, who is 56, reportedly became a strong opponent of illegal immigration in part because of a customer-service recording that gave her the option to continue in Spanish.