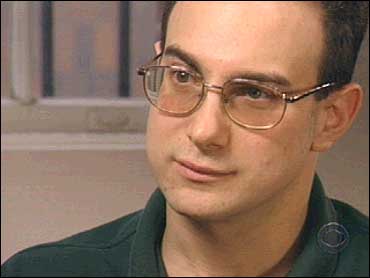 For most of his adult life, Marty Tankleff has lived behind bars, convicted of killing his parents. It's a murder he insists he didn't commit. The slayings occurred when he was 17 and now, reports Erin Moriarty, it's the testimony of another 17-year-old that may be Tankleff's last — and best — chance for freedom.

Marty Tankleff called 911 after finding his parents viciously stabbed on the morning of Sept. 7, 1988, in their waterfront home on Long Island, N.Y. His mother, Arlene Tankleff, died at the scene; his father, Seymour, was mortally wounded.

"I thought it was a nightmare. I just couldn't believe that this was reality," Marty Tankleff says.

But police said it was Marty who killed his parents. It's a charge he denies.

"There's no way I could have hurt my parents," he says. "I loved them."

But after hours of tough interrogation, police say they got Marty to confess.

"They broke this kid. Hid him from us," says Marty's cousin, Ron Falbee. "Took him to interrogation room and worked on him for a couple of hours and finally got this kid to turn around and say, 'OK, if you say I did it — I did it.' "

Marty never signed the confession, and immediately recanted the statement he says he was forced to make.

"It's like having an 18-wheeler driving on your chest and you believe the only way to get that weight off your chest is to tell the police whatever they want to hear," he says.

But on the strength of that statement, Marty Tankleff was tried and convicted.

His family has been working feverishly to get him out. They brought in a new legal team and a secret weapon, a private investigator named Jay Salpeter.

"In order to get Marty out of jail we had to get something that no other person or no other attorney had here. I had to give the attorney the murderer," says Salpeter, a former New York City police detective.

Salpeter believes he knows who is behind the murder of Arlene and Seymour Tankleff. "Jerry Steuerman," he says.

Steuerman was Seymour Tankleff's business partner who owed Tankleff hundreds of thousands of dollars and was at the house the night of the crime.

"They had real fears about Steuerman," says Falbee.

Police never considered Steuerman a suspect, even though soon after the murder, he faked his own death and hid in California.

"This didn't ring any bells?" says Falbee. "Somebody should have been sitting their scratching their head, saying we got nothing on this kid and things are starting to pile up over here."

Jay Salpeter tracked down Glenn Harris, who says Steuerman was behind the Tankleff killings.

Harris, a career criminal, says that he drove two other men, Peter Kent and Joseph "Joey Guns" Creedon, to the Tankleff house the night of the murders.

Harris says they were planning to rob the house but says that more than a burglary went down that night.

"It appeared there was an encounter of some sort," he says.

Based in part on Harris' statement, the Tankleff legal team won a hearing for Marty Tankleff to see if a new trial was warranted.

The surprise witness was 17-year-old Joe Guarascio, the son of Joseph "Joey Guns" Creedon, one of the men Glenn Harris says he drove to the Tankleff house.

After watching a 48 Hours report on TV that linked his father to the Tankleff murders, Guarascio says he confronted Creedon.

Guarascio says his father told him that besides himself, Peter Kent and Glenn Harris also went to the house. But Guarascio says they did not go to the Tankleffs for a robbery. "To murder these two people," he says.

The district attorney says that neither Glenn Harris nor Joe Guarascio are credible witnesses but the young man who turned in his own father for a stranger says he believes Marty is an innocent man.