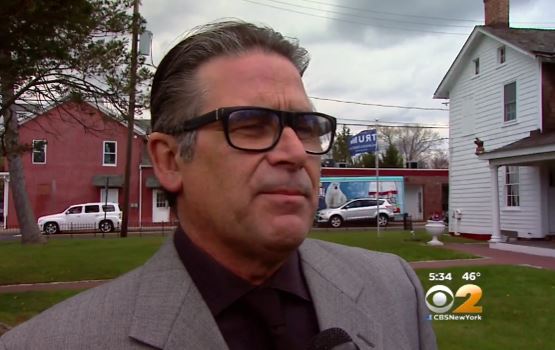 WEST LONG BRANCH, New Jersey-- A New Jersey man wants Donald Trump to be president so badly he's flying flags for him -- and willing to go to jail for him, no matter what his neighbors think.

Joseph Hornick Jr. believes Trump -- currently the front-runner in the 2016 GOP presidential nomination race -- will make America great again and flies two flags outside his home to show his support.

Two weeks ago, a neighbor complained about the flags and called police. Hornick was told to take them down. That's because in West Long Branch, the flags are considered political signs under a borough ordinance.

In West Long Branch, the ordinance states political signs can't be displayed until 30 days before an election. Hornick argues they are not political signs.

"This is basically, in my opinion, a Trump fan flag," he said. "I'm a fan of Donald Trump. I am proud of it, and I'm expressing my First Amendment rights."

Police gave Hornick a ticket for violating the ordinance. He is due in court April 20.

"I'm going to keep on flying my flag at all costs," he said. "If they have put me in jail for expressing my freedom, I'll do the jail time, whatever it takes."

According to the borough clerk, if charged, Hornick could face up to a $2,000 fine and jail time.

No one CBS New York spoke to supported the borough ordinance. They believe Hornick has the right to exercise his views.

"I believe in the freedom of speech in this country," said Joanne Raio, of Ocean Township. "So I think that if he wants to put a flag up for whoever he wants to vote for, we should be allowed to do that."

"What's the difference? It's his own business, I think, what he wants to put on his property," said Frances Caprio, of West Long Branch.

"All it says is the name of somebody," said Ray Antoky, of West Long Branch. "It's not a sign; it's a banner. So how do you interpret it?"