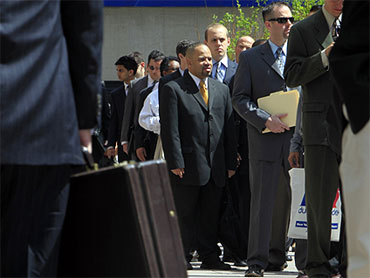 The number of newly laid-off workers filing claims for jobless benefits dropped last week, and the number of people remaining on the rolls also fell, evidence that layoffs have eased.

Still, both figures remain above levels associated with a healthy economy, and analysts expect the unemployment rate to keep rising.

Ohio had one of the largest declines in new claims, down by 1,918 because of fewer auto industry layoffs.

The Labor Department said Thursday that first-time unemployment claims fell nationwide to a seasonally-adjusted 570,000, down from an upwardly revised figure of 580,000 the previous week. Analysts expected a slightly larger drop to 565,000, according to Thomson Reuters.

The tally of those continuing to claim benefits dropped to 6.13 million from 6.25 million in the previous week, the lowest level since early April. The figures on continuing claims lag initial claims by a week.

Economists closely watch initial claims, which are considered a gauge of layoffs and an indication of companies' willingness to hire new workers.

While the figures are volatile, first-time claims have trended downward in recent months. Initial claims topped 600,000 for most of this year, until falling below that level in early July.

The four-week average of claims, which smooths out fluctuations, fell by 4,750 to 566,250 last week. That's about 90,000 below its peak for the current recession, in early April.

The weekly figures remain far above the roughly 325,000 that analysts say is consistent with a healthy economy. New claims last fell below 300,000 in early 2007.

Job losses have slowed recently. The department said earlier this month that companies cut 247,000 jobs in July, a large amount but still the smallest number in almost a year.

(AP/Department of Labor)
The unemployment rate in July from 9.5 percent, its first drop in 15 months. But Obama economic adviser Christina Romer predicted Tuesday that unemployment could reach 10 percent this year and average 9.8 percent next year.

The recession, which began in December 2007 and is the worst since World War II, has eliminated a net total of 6.7 million jobs.

And when federal emergency programs are included, the total number of jobless benefit recipients was 9.19 million people in the week that ended Aug. 8. That was up from 9.18 million in the previous week. Congress has added up to 53 extra weeks of benefits on top of the 26 typically provided by the states.

The large number of people remaining on the rolls is an indication that unemployed workers are having a hard time finding new jobs.

More job cuts were announced this week. Columbus, Ind.-based Cummins Filtration, a division of diesel engine manufacturer Cummins Inc., said it will eliminate about 400 jobs through next March as it shifts production of filter assemblies to a Mexican plant.

Among the states, Michigan reported the largest increase in initial claims, with 4,068, which it attributed to layoffs in the auto industry. The state data lags the initial claims data by one week.

Pennsylvania, Florida, Puerto Rico and Missouri had the next largest increases.

California reported the largest decrease in claims of 6,286, which it attributed to fewer layoffs in the service industries. Tennessee, Texas, Wisconsin and Ohio had the next largest drops.

Meanwhile, the country's economy is still shrinking, but at a slower pace. The gross domestic product , but the 1 percent rate was better than analysts expected.