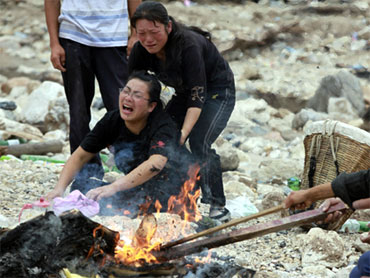 New landslides killed 24 people and left 24 missing in China's remote northwest as downpours threatened more devastation and made rescue work nearly impossible Friday in a region where more than 1,100 people have died.

More rain was forecast for flood-ravaged Gansu province in the coming days - up to 3.5 inches was expected Friday and the National Weather Center said the threat of more landslides along the Bailong River was "relatively large."

But officers with the People's Liberation Army told a press conference in Beijing the threat from barrier lakes formed by debris blocking the river upstream from the mud-struck villages had been removed.

Tents set up as emergency shelters were flooded, and traumatized victims said the ongoing storms were a frightening reminder of the deluge that brought on last Sunday's disaster, in which three villages in Gansu's Zhouqu district were swallowed in waves of mud and rubble-strewn water. Hundreds of homes were completely buried, and the death toll in the northwest flooding was 1,156 as of 4 p.m. Friday.

The report said 10,556 people had been evacuated from Longnan but more than 3,000 were still stuck in the flood-hit area.

"We will seize every chance to find survivors, but it is also important to ensure the safety of rescuers," he said.

But the army officers at Friday's press conference did not mention the possibility of survivors nearly a week after the disaster.

Government officials say the scale of the devastation made counting the dead all the more difficult. Bodies were wrapped in blankets and tied to sticks or placed on planks and left on the debris-strewn streets for pickup.

Crews had been using hand tools to pull out survivors but roads reopened Wednesday, allowing in heavy earth-moving equipment and supplies.

Clean drinking water was a primary concern, with most local sources knocked out or too polluted to use. State media reported numerous cases of dysentery, but there were no reports of an epidemic outbreak.

At least 45,000 people have evacuated their homes, and the Ministry of Civil Affairs reported the delivery of 30,000 tents to the area, with thousands more on the way. Zhouqu has a population of 134,000, but it wasn't clear how many needed emergency shelter.

The Gansu provincial government announced subsidies for families whose homes were destroyed and promised to help rebuild all houses by next June.

Flooding in China has killed more than 2,000 people this year and caused tens of billions of dollars in damage across 28 provinces and regions.