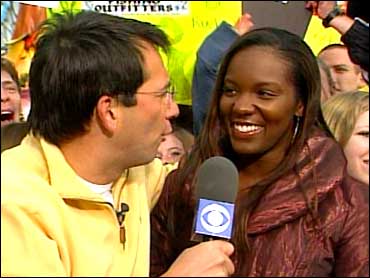 An experimental drug that targets cancer in an entirely new way has yielded disappointing results when combined with chemotherapy for lung cancer patients, but experts remain convinced it has a role in fighting cancer.

The drug, called Iressa, was very impressive in early studies of lung cancer patients who had not been helped by any other therapy.

However, it had no effect when combined with chemotherapy and given as first-line treatment to more than 2,000 patients in two large trials, researchers reported Monday.

Even so, experts gathered in Nice for a meeting of the European Society of Medical Oncology said it's just a question of determining how best to use the drug and who should get it.

Iressa, made by London-based Astra Zeneca PLC, is being investigated for several types of cancer.

"The opinion is that drug does have a role," said Dr. Paul Bunn Jr., director of the University of Colorado Cancer Center.

Bunn, who was not connected with the studies, said that in hindsight, it seems the drug was rushed to large-scale testing.

"But I wouldn't fault them for having done it," said Bunn, who is president of the American Society of Clinical Oncology. "They saw before this trial, in the lab, that you could safely combine these agents and they saw that there was a response in people who failed chemotherapy."

Two trials of about 1,000 patients each were conducted. One was done in the United States using the chemotherapy combination most commonly used there. The other was conducted in Europe, with a slightly different combination of chemotherapy drugs.

Each trial divided patients into three groups. Everyone got chemotherapy. In addition, one group got 250 mg of Iressa daily, another got 500 mg and the third group got a dummy pill.

"The bottom line is there is not any difference in the outcome. The survival in the three arms is essentially identical," said Dr. David Johnson, who presented the American results at the meeting.

The results of the European trial were the same.

Iressa is one of the new class of so-called targeted therapies that works by specifically interfering with cancer rather than all fast-growing tissue, as standard chemotherapy does. As a result, it carries far fewer side effects, and patients often can safely take it for months or even years.

Iressa is designed to block one of the main signals cancer uses to propel its out-of-control growth stimulation of the chemical docking posts called the epidermal growth factor receptors.

Iressa gets inside cancer cells and blocks the signal that is fired off when one of these receptors, called HER-1, is stimulated. That signal is one of the driving forces that makes cancer grow quickly, spread through the body and become resistant to chemotherapy drugs.

Because of cancer's resiliency, most experts doubt any single new drug will be broadly effective. Combinations that strike at cancer at multiple points in its life cycle will probably be necessary, and are probably still years away.

Dr. Martine Piccart, head of chemotherapy at the Jules Bordet Institute in Brussels, said Iressa may be effective if patients are carefully selected.

"I think we may find a subset of patients who benefit from this drug," Piccart said.

Johnson said that view is not surprising.

"Every doctor who deals with lung cancer, who has used this drug, can name you at least one case that he or she has seen where the patient's tumor has nearly melted away. And these patients instantly feel better. You don't see this with any other drug that we use," said Johnson, deputy director of the Vanderbilt-Ingram Cancer Center in Nashville, Tennessee.

"Even if it's a rare event, it's so stunning when it occurs that each of us is kind of slack-jawed when it happens," Johnson said.