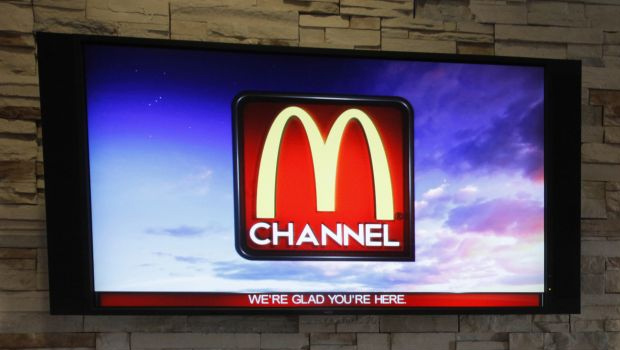 (AP) LOS ANGELES - The question of the moment at 700 pioneering McDonald's (MCD) restaurants: You want TV with those fries?

Not just any television, but the custom-made M Channel, formulated and tested with the same attention to detail that made Big Macs and Chicken McNuggets cultural icons.

The channel's aim is to offer exclusive content to entertain customers. More ambitiously, it also intends to create promotional and sales opportunities for record companies and others who want to dive into McDonald's vast customer pool.

Lee Edmondson, who has spent more than eight years developing the concept for McDonald's and years beforehand pondering it, said the fast-food chain is thinking way outside the TV box.

"It is a vision that is more than television," more than the "passive relationship" that viewers have with gas station or supermarket TV feeds, said Edmondson, who comes from a venture-capital background.

The M channel is akin to a broadcast network with its own news, entertainment and sportscasts localized for cities and even neighborhoods, he said. But there's more: It will supersize the experience by directing viewers online for shopping or other opportunities.

Get details on a featured electronic toy or be among the first to download a music video discovered via M Channel. Want to get close to artists you heard on your coffee break? Enter to win backstage concert passes or maybe lunch with them (just a guess, but the location may not be optional).

M Channel's goal is to target different audiences at different times of day and be so area-specific that a restaurant could show high school football game highlights to hometown fans, Edmondson said. News reports are taped by local station anchors for the channel.

Among those who have enlisted as content providers are producer Mark Burnett ("Survivor," "The Voice"), ReelzChannel and broadcast stations. A range of advertisers, minus other restaurants and perhaps alcoholic beverages, will be welcome, Edmondson said.

For now, the programming is in its infancy. At a McDonald's in Costa Mesa, south of Los Angeles, a flat-screen TV tucked in a corner showed an hour-long loop that included weather; a trivia quiz that promoted "Jeopardy!"; features on windsurfing in Maui and auto racing, and a Hollywood movie report packaged by ReelzChannel.

A mom grabbing a meal with her two children briefly glanced at a tech segment on back-to-school products including computers and smartphones before exiting.

Other diners sitting close to the TV were buried in their laptops, phones or magazines, the screen showing the distinctive arched "M" logo merely providing wallpaper.

Ruby Lua of Santa Ana, who works at a nearby supermarket, took a break from texting to say she preferred the satellite feed the restaurant used to show. How about if the channel offered music and related downloads?

"That would be more interesting," said the 18-year-old Lua, perking up.

That opening is just what Edmondson wants to exploit.

"If you see a piece of content that connects with you immediately, we've provided you a value," he said. "If we can do it consistently, we become a trusted source of information ... and a great way for content providers to engage with consumers."

"Interscope values a new way of communicating to customers where our content is positioned front and center to a massive audience," said Jennifer Frommer, the company's head of brand partnerships. "The channel provides a platform to market music in ways that have never been done before."

The pilot project, which began testing in scattered Western outlets two years ago, recently completed expansion to all McDonald's California outlets from San Diego north to Bakersfield. All told, the eateries get nearly 15 million monthly visits from adult customers alone.

M Channel could expand to the roughly 14,000 McDonald's nationwide within 18 months of getting the "go" from the company and franchisees, Edmondson said. He declined to predict when the green light could come for the project that has advanced with caution, the giant chain's approach to making changes.

The end game Edmonson foresees: Versions of the channel in McDonald's worldwide, and perhaps the birth of a template for other industries. So far, the investor-funded Channel M has consumed tens of millions of dollars and it "will be that again to pull it off," he said, declining to give an exact figure.

The M channel is "a smart thing to do," said Valerie Folkes, a marketing professor at the University of Southern California's Marshall School of Business.

TV sets, which originally sprouted in auto service shops and elsewhere to keep customers distracted while cooling their heels, have new potential in a splintered media market.

"Advertisers face difficulties not only in reaching the right people but also in capturing their attention," Folkes said. "Here they have people who they know are customers and who are more inclined to listen to their message."

"Ad revenues are important, but the channel must be positively received by our customers in order to be viewed as a success," said Brad Hunter, senior marketing director for McDonald's USA.

Philip Palumbo, who owns 11 McDonald's in San Diego County and is the marketing co-op head for the county's outlets, has seen an immediate benefit from the pilot project: No more complaints to workers about the network fare his customers saw via satellite.

"The content was not necessarily appropriate," Palumbo said. "The big things were politics. Others were violence, usually on the news, or medical stuff like showing surgery."

As Folkes of USC put it, "You can imagine a news story about 'pink slime' is not going to make a McDonald's customer eager to eat that Big Mac."