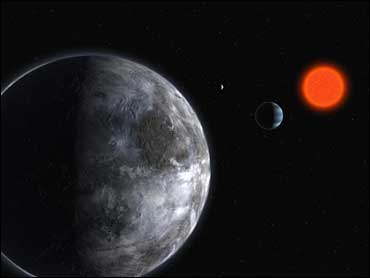 For the first time, astronomers have discovered a planet outside our solar system that is potentially habitable, with Earth-like temperatures, a find researchers described Tuesday as a big step in the search for "life in the universe."

It's Earth-like because its temperature is close to ours, between 32 and 104 degrees Fahrenheit, reports CBS News correspondent Sandra Hughes. It has gravity and the potential for water.

Its sun, called a red dwarf, is colder and not as bright as our sun. Still, this discovery gives kids a reason to imagine life in outer space, adds Hughes.

The planet is just the right size, might have water in liquid form, and in galactic terms is relatively nearby at 120 trillion miles away.

There's still a lot that is unknown about the new planet, which could be deemed inhospitable to life once more is known about it. And it's worth noting that scientists' requirements for habitability count Mars in that category: a size relatively similar to Earth's with temperatures that would permit liquid water. However, this is the first outside our solar system that meets those standards.

"It's a significant step on the way to finding possible life in the universe," said University of Geneva astronomer Michel Mayor, one of 11 European scientists on the team that found the planet. "It's a nice discovery. We still have a lot of questions."

The results of the discovery have not been published but have been submitted to the journal Astronomy and Astrophysics.

Alan Boss, who works at the Carnegie Institution of Washington, where a U.S. team of astronomers competed in the hunt for an Earth-like planet, called it "a major milestone in this business."

The planet was discovered by the European Southern Observatory's telescope in La Silla, Chile, which has a special instrument that splits light to find wobbles in different wave lengths. Those wobbles can reveal the existence of other worlds.

What they revealed is a planet circling the red dwarf star Gliese 581. Red dwarfs are low-energy, tiny stars that give off dim red light and last longer than stars like our sun. Until a few years ago, astronomers didn't consider these stars as possible hosts of planets that might sustain life.

The discovery of the new planet, named 581 c, is sure to fuel studies of planets circling similar dim stars. About 80 percent of the stars near Earth are red dwarfs.

The new planet is about five times heavier than Earth. Its discoverers aren't certain if it is rocky like Earth or if it's a frozen ice ball with liquid water on the surface. If it is rocky like Earth, which is what the prevailing theory proposes, it has a diameter about 1½ times bigger than our planet. If it is an iceball, as Mayor suggests, it would be even bigger.

Based on theory, 581 c should have an atmosphere, but what's in that atmosphere is still a mystery and if it's too thick that could make the planet's surface temperature too hot, Mayor said.

The new planet seems just right — or at least that's what scientists think.

"This could be very important," said NASA astrobiology expert Chris McKay, who was not part of the discovery team. "It doesn't mean there is life, but it means it's an Earth-like planet in terms of potential habitability."

Eventually astronomers will rack up discoveries of dozens, maybe even hundreds of planets considered habitable, the astronomers said. But this one — called simply "C" by its discoverers when they talk among themselves — will go down in cosmic history as No. 1.

Besides having the right temperature, the new planet is probably full of liquid water, hypothesizes Stephane Udry, the discovery team's lead author and another Geneva astronomer. But that is based on theory about how planets form, not on any evidence, he said.

"Liquid water is critical to life as we know it," co-author Xavier Delfosse of Grenoble University in France, said in a statement. "Because of its temperature and relative proximity, this planet will most probably be a very important target of the future space missions dedicated to the search for extraterrestrial life. On the treasure map of the Universe, one would be tempted to mark this planet with an X."

Other astronomers cautioned it's too early to tell whether there is water.

"You need more work to say it's got water or it doesn't have water," said retired NASA astronomer Steve Maran, press officer for the American Astronomical Society. "You wouldn't send a crew there assuming that when you get there, they'll have enough water to get back."

The new planet's star system is a mere 20.5 light years away, making Gliese 581 one of the 100 closest stars to Earth. It's so dim, you can't see it without a telescope, but it's somewhere in the constellation Libra, which is low in the southeastern sky during the mid-evening in the Northern Hemisphere.

Before you book your extrastellar flight to 581 c, a few caveats about how alien that world probably is: Anyone sitting on the planet would get heavier quickly, and birthdays would add up fast since it orbits its star every 13 days.

But oh, the view. The planet is 14 times closer to the star it orbits. Udry figures the red dwarf star would hang in the sky at a size 20 times larger than our moon. And it's likely, but still not known, that the planet doesn't rotate, so one side would always be sunlit and the other dark.

Distance is another problem. "We don't know how to get to those places in a human lifetime," Maran said.

Two teams of astronomers, one in Europe and one in the United States, have been racing to be the first to find a planet like 581 c outside the solar system.

The European team looked at 100 different stars using a tool called HARPS (High Accuracy Radial Velocity for Planetary Searcher) to find this one planet, said Xavier Bonfils of the Lisbon Observatory, one of the co-discoverers.

Much of the effort to find Earth-like planets has focused on stars like our sun with the challenge being to find a planet the right distance from the star it orbits. About 90 percent of the time, the European telescope focused its search more on sun-like stars, Udry said.

A few weeks before the European discovery earlier this month, a scientific paper in the journal Astrobiology theorized that red dwarf stars were good candidates.

"Now we have the possibility to find many more," Bonfils said.