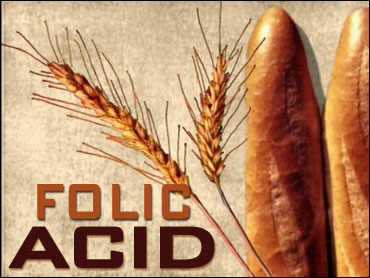 Women who get large amounts of the vitamin folate from food and supplements have a sharply lower risk of developing high blood pressure, a study of 150,000 women found.

It is the first large study to explore the link, and it adds to the mounting body of evidence that the B vitamin might help ward off heart disease and strokes.

But the study's lead author and an outside expert warned that much more research is needed before concluding that women should increase their consumption of folate.

Folate is found in such foods as oranges, dark green leafy vegetables, beans, legumes, liver and eggs. In the United States, it is also added to cereal and flour products to help prevent birth defects.

The new study, published in Journal of the American Medical Association, involved one large group of women ages 27 to 44 and another ages 43 to 70. They recorded their folate intake over an eight-year period during the 1990s. Participants did not have a history of high blood pressure.

The effect was less pronounced in older women, who saw an 18 percent reduced risk of high blood pressure from consuming high levels of folate.

The current recommended daily allowance of folic acid is 400 micrograms per day.

Research has shown that up to 70 percent of birth defects of the brain and spine, and many cases of Down Syndrome, can be prevented by maintaining adequate folic acid levels before and during pregnancy, points out The Early Show medical correspondent Dr. Emily Senay. Studies have also shown folic acid to be important in preventing early miscarriage, she notes.

Folic acid may possibly reduce the risk of some cancers and Alzheimer's disease.

Senay says we know it's essential for women of child-bearing age to have adequate folic acid before a pregnancy occurs. And the latest research shows another good reason for women to maintain those levels, regardless of their child-bearing status.

"If these findings are confirmed by a large, randomized, controlled trial, it would suggest that folic acid, which is both safe and readily available, could be used as a preventative measure against high blood pressure," said the study's lead author, Dr. John Forman of Harvard-affiliated Brigham and Women's Hospital in Boston.

The study also found that women who got their folate from food alone, instead of from supplements, had difficulty consuming enough of the vitamin to show a significant reduced risk of high blood pressure.

American Heart Association spokesman Dr. Daniel Jones said the findings are intriguing and warrant more research. But he said many past studies that showed strong benefits from vitamins have produced disappointing results during more stringent research.

He cited research that showed that taking large quantities of vitamin E was probably worthless for heart patients and might even do harm by interfering with cholesterol-lowering drugs.

Previous research showing that folate could help prevent devastating birth defects of the brain and spinal cord led the U.S. government to mandate that all grain foods be fortified with folate starting in 1998. A federal study published last year linked that regulation to a decrease in heart disease and strokes.