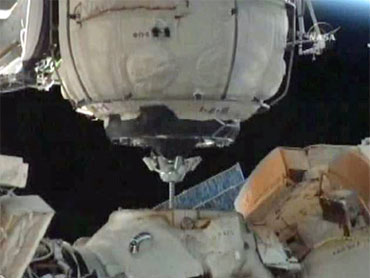 The International Space Station got a little extra room today, with the addition of a new, nine-ton Russian module.

Using robotic precision in place of brute force, the Mini-Research Module-1 (MRM-1), delivered to the ISS by the space shuttle Atlantis loaded with supplies and equipment, was successfully attached to the ISS early today after an orbital "hole in one" by robot arm operator Garrett Reisman.

"And Houston, ISS robo. Just to follow up on (readings from the Russian) laptop," Sellers called. "We said before 'contact 1' never came on and it's still not showing. And also we got a fault, a yellow block, 'no auto docking signal' statement under the ADS faults."

"And station, that error's expected," Swanson replied. "Everything looks good at this time to us. ... The reason you didn't get 'contact 1' is because Garrett did too good of a job flying. He went right down the middle and got a hole in one."

"He knows that and he's loving it," Sellers replied.

Reisman thanked station Flight Director Emily Nelson and the rest of the U.S.-Russia team, saying "Great job getting us to this point and we're very happy that we now have MRM-1 docked to the station."

Reisman and Sellers, speaking Russian, both then thanked the Russian mission control team.

"Houston, Moscow, thank you for delivering a new module," station commander Oleg Kotov radioed, speaking English. "We really enjoy work with excellent crew and they did excellent job. Thank you very much."

Reisman, operating the station's arm, then locked on and took over, maneuvering the squat module into position for attachment to the Zarya module.

Russian modules normally dock autonomously, using more force than NASA typically employs. Using that momentum to overcome alignment errors, a probe on the front end of an approaching Russian module can hit anywhere in the receiving cone and it will end up in the correct central position for capture.

The station's robot arm could not deliver the normal docking force, but it more than made up for that shortcoming by the precision alignment achieved before the final capture sequence. The approach was so precisely-aligned the Russian laptop computer Sellers was using to monitor the docking sequence did not even register several intermediate steps.

With Rassvet in place, the Atlantis astronauts will spend the rest of the day gearing up for a spacewalk Wednesday, the second of three planned for the mission, to begin replacing six aging batteries in the station's oldest set of solar arrays.

Reisman also will use the station arm to pull the shuttle's heat shield inspection boom from the orbiter's payload bay, handing it off to Atlantis' arm.

Interference with a cable in the pan-and-tilt mechanism of the primary sensor package on the end of the boom forced the astronauts to use a backup procedure to inspect the shuttle's nose cap and wing leading edge panels the day after launch. Additional inspections may be necessary later.

But engineers have developed a repair plan to move the offending cable and tie it out of the way. Repair plans were uplinked to the crew overnight for possible use during the crew's second spacewalk.