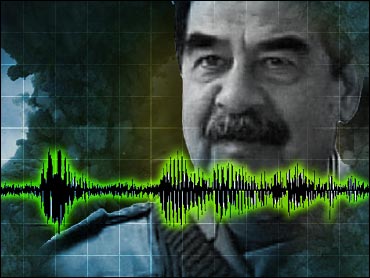 While both Al Hayat-LBC and Al-Jazeera channels said the tapes were new, they contained excerpts that were identical to a tape received by the Sydney Morning Herald in May that it then broadcast on its Web site.

The tape, which the Lebanese broadcaster Al Hayat-LBC aired in its entirety, proved identical to the one broadcast by the Australian newspaper three months ago. Although also of bad quality, the tape of the Lebanese channel was more audible.

Ibrahim Hilal, the editor-in-chief of Al-Jazeera, said the tape his station received was the same as the one aired by its Lebanese competitor. Qatar-based Al-Jazeera didn't air the complete 15-minute tape, which it said they received two days earlier.

The voice on the tapes, which sounded like Saddam to journalists familiar with the fallen dictator, quoted him as giving instructions to resist U.S. and British forces.

"I appeal to you, oh Iraqis, Arabs, Kurds and Turkmen, Shiites or Sunni, Christians or Muslims, it is your duty to expel the aggressor invaders from our country," the purported voice of Saddam said on the tape broadcast by Al Hayat-LBC.

The same quote was on the Sydney Morning Herald tape — with identical wording in Arabic. So were other sound bites from Tuesday's broadcasts.

"The return to underground operations that we started from the beginning is the best way for Iraqis to achieve independence," the voice said on the broadcast by Al-Jazeera. The voice added he was speaking "from inside glorious Iraq." These quotes were also on the Sydney Morning Herald tape.

"Close your ranks and act as one hand," the voice said on the Al Hayat-LBC broadcast. "Boycott the occupying soldiers … Act, and do not let the occupying forces settle down in your land."

"He who favors division over unity, and acts to divide ranks instead of unifying them, is not only a servant of the foreign occupier but he is also the enemy of God and the people," the voice said on the Al-Jazeera broadcast.

"Go on, you Iraqis, as victory is near, God willing," the voice added on Al-Jazeera.

"The tape doesn't carry any indication of when it was recorded," Hilal of Al-Jazeera said, but he added the tape included a reference to the ousted leader's birthday, which was celebrated in April. The LBC-Al-Hayat also included the same mention of Saddam's birthday.

The tape received by the Sydney Morning tape included a reference to Saddam's birthday, and how the Iraqi people conveyed their loyalty to the deposed leader by celebrating in the streets of Baghdad.

Last week, Al-Jazeera broadcast extracts from another tape that CIA analysts said was "most likely" the voice of Saddam. The phrases and voice on the July 4 tape were similar to Tuesday's tapes.

"There are a lot of Saddam tapes out there," Hilal said, without elaborating. He refused to say how the station received the tape aired Tuesday.

At Al Hayat-LBC in Beirut, an official said a staffer found the tape on the doorstep of the Baghdad office on Tuesday morning.

Al-Jazeera said the July 4 tape was played to it down a telephone line, which helped to explain its poor quality. CIA analysts said the bad quality of that tape prevented them from being certain it was Saddam.

In the earlier tape, the speaker claims the recording was made on June 14. But intelligence officials said there were no references in the message that absolutely ruled out the possibility that it was prerecorded before June 14.

Still, the CIA's determination that the tape was probably authentic would further buttress most intelligence analysts' belief that Saddam survived the war, including at least two attempts aimed at killing him. That impression would be strengthened if the latest tape were also authentic.

In the July 4 recording, the speaker purporting to be Saddam said he is still in Iraq and directing attacks on American forces there. He called on Iraqis to resist the U.S.-led occupation.

U.S. forces in Iraq have been targeted daily by ambushes, and dozens have died since the war's major fighting ended.

Last week, the U.S. government put a $25 million bounty on Saddam's head, and offered $15 million for each of his sons, Odai and Qusai. American officials say the mystery over Saddam's whereabouts fuels anti-U.S. attacks by his loyalists.

The guessing game over the recordings mirrors a debate during the invasion of Iraq, when several taped appearances by Saddam were shown on Iraqi state TV. As with the new audio tapes, it was unclear when the videos played during the war were actually filmed.

Saddam's image — either his own or that of a body double — was last seen exhorting crowds in Baghdad on April 9, the day the city fell. The scenes were captured in film released days later.