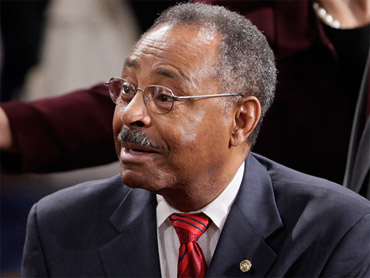 There is one African-American in the current Senate: Illinois Sen. Roland Burris, who was appointed to fill out the rest of Barack Obama's term after he was elected president.

In the new Senate there will be zero.

All three African-American candidates are projected to lose their races: Florida's Kendrick Meek to Marco Rubio, Georgia's Michael Thurmond to Johnny Isakson and South Carolina's Alvin Greene to Jim DeMint. (All three are Democrats.) Burris is retiring, and neither of the contenders to fill his seat is African-American.

Six African-Americans have served in the Senate. Along with Burris and Mr. Obama, they are (in reverse chronological order) Carol Moseley Braun (also of Illinois), Edward Brooke of Massachusetts, and Blanche K. Bruce and Hiram Revels of Mississippi.

African-Americans are better represented in the House, where there are currently 41 black members.