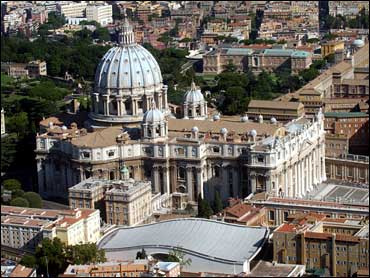 The Vatican is facing allegations that one of Pope Benedict's ceremonial ushers, as well as a member of the Vatican choir, were involved in a gay prostitution ring.

"The latest shadow on the church's image," reports CBS News Correspondent Richard Roth, "comes from leaked police reports (on) wiretaps in a separate corruption case. The Vatican wasn't a target, but it's taken a hit."

The recordings, according to Italian press, reveal Angelo Balducci, an Italian executive who's been a Gentleman of his Holiness -- the elite group of black-suited men who serve the pope in unpaid roles as ushers -- negotiating with the 29-year-olf Nigerian Vatican choir member for the services of male prostitutes, as part of the larger prostitution ring.

Balducci is under arrest.

The Vatican reportedly has cut ties to both men but, notes Roth, "bad publicity over sex and sexual abuse charges still confronts the church.

"Irish bishops were called to Rome in february after Benedict expressed outrage over a pedophilia scandal in their country. A prominent Catholic religious order countered new corruption charges in Mexico this week over sex and money. And the pope's old diocese figures in some of the newest sexual abuse claims in Germany."

"We're just scratching the surface here," says CBS News consultant Father Thomas Williams. "There's definitely more to come. We only know of these two men connected with the Vatican in some way, but obviously, they're talking about a ring, and a ring means definitely more people involved. So, I'm sure more will be coming out in the days to come."

Williams, speaking from Vatican City, observed to "Early Show Saturday Edition" co-anchor Chris Wragge that, "It's really a sordid affair, and we really didn't need this right now, but it is what it is."

How could a papal usher have been involved in what authorities claim Balducci was up to?

"You do the best you can to screen these people. But there are 150 of these men that serve as ushers as Gentlemen to His Holiness. And it's hard to know exactly what they're doing in their private lives. They don't live in Vatican City, they have their jobs, their families and they have other things going on, as well."

Vatican officials, says Williams, have "tried to distance themselves from these two men, letting them both go, the one form the choir, the other form the gentlemen. I'm sure the Pope will have words about this, as well, just once again saying. 'This and is not what we believe and this is not what we teach, and people simply make mistakes." '

The Catholic church, Williams says, has "got to endure it. What gives us a little bit of hope and consolation -- you look back over the centuries, and this has been going on for an awfully long time. It's not something unique to the Catholic Church, either. It's a part of our fallen human nature. People do this. It's just hard when it's people who are very well-known, people who have celebrity and people especially connected to a religious organization who are meant to give a better example."

Williams admits it's "very tough" coping within his own order when charges of these nature surface. "This is something that's very painful for all of us and it makes me appreciate what other people have suffered, as well, because you really feel let down. It's like having a father figure, mother figure, someone who's been very close to you who goes and does something terrible and you do, you feel very let down. But you have to just pick up the pieces and keep going."